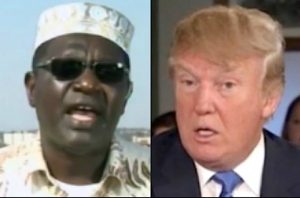 Donald Trump is back to making America laugh again. And as usual it’s unintentional.

It appears Trump’s plan to get back at President Obama for his slam yesterday that Trump needs to “stop whining” is to bring Obama’s Kenyan born half-brother Malik Obama to tonight’s debate. The irony of this move by Trump is hilarious.

Why? Well under Trump’s “total and complete shutdown of Muslims entering the United States” that he announced in December, guess who would’ve not been allowed in the United States? Yep, Obama’s half brother who is Muslim and from Kenya.

And even under Trump’s new and improved “Muslim ban” that would require “extreme vetting” and ban Muslims from countries that are linked to terrorism, Malik wouldn’t have been able to get past customs. There have been numerous terrorist attacks in Kenya in recent years from the 1998 attack on the US embassy by Al Qaeda that left 200 dead to various attacks by the terrorist group Al-Shabaab including one in 2014 that left over 150 dead at Kenya University.

Also we have to wonder if Malik could’ve passed Trump’s “extreme vetting” that requires immigrants to share “our values.” (I can assure you that I and per polls most American’s don’t share Trump’s “values.”) But in Malik’s case, as CBS News reported, he is a polygamist with reportedly three wives. Malik married his newest wife when she was 19, making her over 30 years younger.

Maybe Trump bringing Malik to the debate has less to do with taunting President Obama and more to do with Trump being a fan of a guy who in his 50’s could marry a 19 year old? Of course, I don’t in any way want to equate Trump and Malik –as opposed to Trump, there are zero allegations that Malik has ever sexually assaulted women or bragged about doing the same.

But Trump bringing Malik to the debate is more proof that Trump thinks his presidential campaign is a reality show. It’s substance free but attracts eyeballs. And while GOP voters had no problem embracing Trump’s showmanship coupled with his sexism, bigotry and racism, the rest of America demands more from a President, like understanding fundamental issues and not lashing out at everyone who criticizes him from President Obama to Saturday Night Live.

In terms Trump will understand, tonight’s debate is the ultimate episode of “The Trump presidential reality show.” And come November 8, we will hopefully all get to watch the series finale of this horrific show.