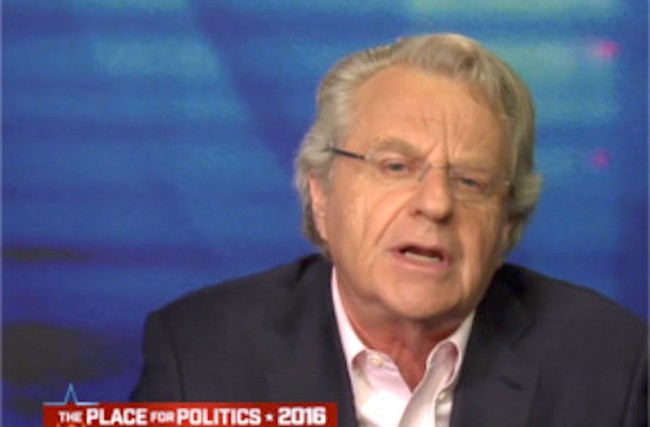 So, just how bad were President Donald Trump’s tweets calling MSNBC’s Mika Brzezinski a dumb crazy person who was suffering from a bleeding facelift when he saw her on New Year’s Eve?

So bad that “The Ringmaster” himself feels it has scraped the bottom of the barrel.

I’m sorry, but Trump’s behavior is not just beneath the dignity of the Presidency…but that of any decent man.

Yep, trash talk legend Jerry Springer feels Trump’s behavior is “beneath the dignity of the Presidency.” I mean, when the guy who was responsible for giving us television featuring a man who married his horse thinks you’ve crossed a line…

saying nothing of trump — this is jerry springer saying this. https://t.co/s3fAsPImU8

You do realize you are Jerry Springer, correct? https://t.co/sMXQPWTtdq

Jerry Springer looks at how our President comports himself and comes away unimpressed. Jerry Springer. https://t.co/3lsFlaNvk3

Today in US History: Jerry Springer scolds a president for being undignified. https://t.co/wncRPWaJfQ

When even Jerry Springer calls you out….. https://t.co/Rv6GdAzRDd

Meanwhile, it appears that we’ll be getting more coverage of the tweets over the coming days. Joe Scarborough and Brzezinski have claimed that the White House threatened them with a National Enquirer hit piece. And, of course, we got a response from Trump and the National Enquirer published a story on a “cheating scandal” involving Joe and Mika.