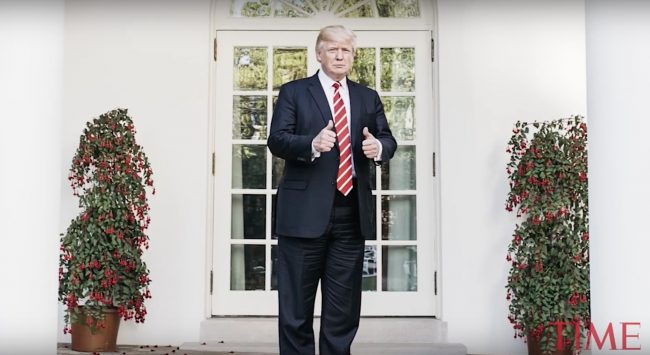 Editor’s Note: This piece includes language not usually used on Mediaite but was deemed necessary to define specific terms.

President Trump‘s morning tweet attacking MSNBC’s Mika Brzezinski started a firestorm of news and brought nearly bipartisan rebuke from both the political world and media outlets. The common themes in the vast majority of the criticism was that Trump’s tweets were both undignified and beneath the office of the presidency. But these critiques overlook another really important quality in the president: that he is showing himself to be an undeniable douchebag.

Trump has consistently confused negative news coverage with lies and cries of Fake News, while he himself has very often promoted stories that are easily proven to be untrue.

Trump talks about respect for the office and unfair name calling, but he systematically dismissed his political opponents with grade school style epithets like “Lyin’ Ted,” “Little Marco” and “Crooked Hillary.” And yet when someone in the media takes a swipe at him, he responds in the manner that’s unbefitting of a gentleman, let alone the commander-in-chief.

If anyone in the mainstream media were to attack the President in the manner that he attacked Ms. Brzezinski this morning, they would reasonably called to the carpet and likely fired. And no, making jokes about Trump’s “teency hands” does not compare to Trump’s tweet this morning.

And no, I am not engaging my own double standard by labeling the President with a middle school epithet. I am not the president of the United States (yet). If Trump is going to openly and aggressively attack in a disrespectful and childish manner, then he doesn’t deserve the respect he commands from the media.

In sum, Trump is proving himself to be a douchebag, a phrase I never before used to describe a public figure (at least publicly). He could apologize, he could retract but of course he won’t because. . .he is a douchebag. (He is also a professed “pussy grabber” but that is another story.)

But as Sarah Huckabee Sanders said in today’s press briefing, the Americans who voted for Trump “knew what they were getting” while defending the “fight back” way of President Trump.

Maybe, but if he keeps this up, I am afraid that there will soon be some serious buyer’s remorse.

Colby Hall is the Managing Editor of Mediaite.com and knows a thing or two about douchebags.. You can follow him on Twitter at @colbyhall