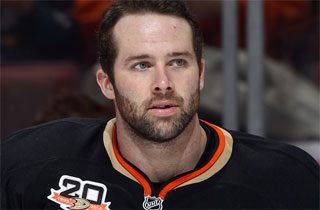 Dustin Penner, an NHL player lined up with a sweet post-career TV gig, lost said gig this weekend after not only making a bad rape joke on Twitter, but trying to cover up the bad rape joke with even more bad rape jokes.

Penner, who most recently played for the Washington Capitals, was scheduled to cover the NHL’s trade deadlines on TSN along with Canadian sportscaster Cabral “Cabbie” Richards. It would have been a fantastic career move — Penner had recently become a free agent and, at the age of 32, was probably done with his hockey career — until he did this:

Is it always consensual if she's your girlfriend? Asking for my gf…& shortly arriving police

The normal Twitter rage ensued, which only escalated when Penner insulted his followers:

I came up with the joke with my gf U idiots freaking out about this.

Is it a rape joke if it's your girlfriend? Is this even my girlfriend?!?!

After numerous people called him out, Penner apologized:

I see the offensive side of my joke. On behalf of those who laughed, my gf & I included, I apologize. We understand we are awful people.

Furthermore my gf and I were in lying in bed and the hypothetical question was "raised" "what if I had been sleeping?" And then we laughed

Oh and I was the one sleeping.

Shortly after Yahoo! News reported that TSN had pulled Penner from the lineup, he offered a sincere apology on Twitter:

My goal isn't to hurt anybody who has suffered. I can see how my words might have done this though. To those who were hurt by it: I'm sorry

Some friends have texted me today telling me they're survivors. They said that while I didn't intend harm it still might've hurt survivors.

And then. And then.

To set the record straight I pulled out of the TSN gig an hour after my tweet because of the position I put them in. pic.twitter.com/N5k8wKHxsc

STOP EXPLAINING YOURSELF JUST SHUT UP.