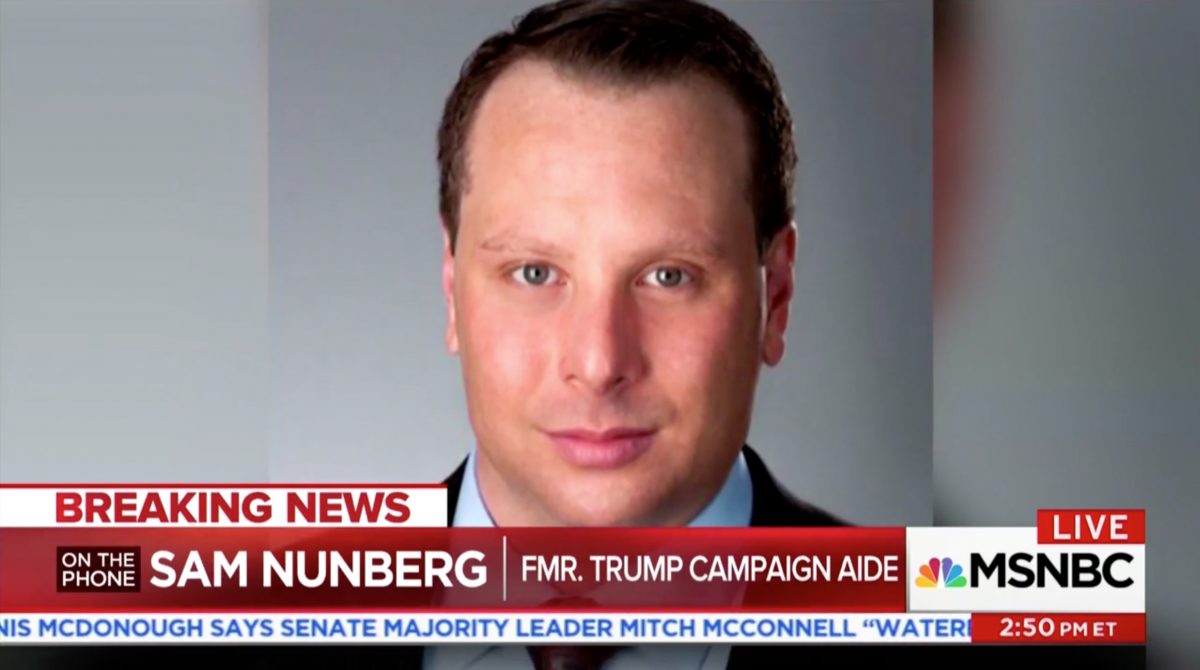 Former Donald Trump aide Sam Nunberg called into Katy Tur’s MSNBC show on Monday for what turned out to be a wild interview on the Russia investigation, featuring a number of absolutely stunning quotes.

Over the course of the interview, Nunberg — an early adviser to Trump’s campaign who announced he would not be complying with a subpoena from Robert Mueller’s Russia probe to appear before a grand jury Friday — dropped a series of bombshell statements, including:

As the interview stretched over segments, it seemed like everyone on Twitter was glued to the madness, with many speculating as to why Nunberg appeared to be losing his mind on national television. Unfortunately, Tur brought the wild ride to an end shortly after the 3 p.m. hour, tossing to a bewildered Kasie Hunt. (Nunberg subsequently called into CNN.)

Enjoy a collection of the reactions to the interview below:

Is anyone watching this all playing out and thinking “They are *definitely* not hiding anything. No, sir. All seems on the level.”

Nunberg. WHAT ARE YOU DOING?!?

“i’m not going to produce every email I had” for investigators Sam Nunberg says. This is very loosely what people were chanting “Lock her up!” at Trump rallies over, right?

Just now: Asked if Special Counsel Mueller has something on @realDonaldTrump fmr. Trump campaign aide Sam Nunberg answers: “I think he may….I think he may have done something”

My jaw has been on the floor for 5 straight minutes

What the fuck is Nunberg doing?

…. I’m positive I’m not the only WH reporter who got preemptive texts from Trump WH officials being like what in the fucking hell is going on rn

Was Sam Nunberg drunk or high during that interview? He just asked NBC’s Katy Tur what does she think Robert Mueller will do to him. https://t.co/2DJtqTzU3U

10. Katy Tur just called the interview remarkable….and then said it was unbelievable. Now Sam Nunberg is asking Katy what she thinks Mueller is going to do to him. OMG

Nunberg: “What’s remarkable about this [interview] by the way?”

Katy Tur: “Everything is remarkable about it”

Carter Page: “Nobody is better at going on national TV and incriminating themselves than I am.”

Why is MSNBC letting @NunbergSam off the phone? Keep it going!! Who cares about the time

11. Katy just ended the interview and handed it over to Kasie Hunt – I can promise you if this were happening on CNN Jeff Zucker would have thrown the schedule out and let Katy keep interviewing Sam.

Give all the Oscars to @KatyTurNBC for that interview, I don’t care what the categories are