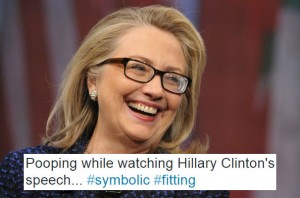 Social media is both wonderful and horrendous. The former because it lets everyday people share their creations, ideas or comments with an almost global audience. The latter — for the same reasons.

So of course Hillary Clinton‘s big campaign speech at Roosevelt Island was going to draw the best and worst Twitter had to offer on Saturday. Most were heavily politicized, partisan and not really worth the time. Many others, however, were downright wonderful — intentional and otherwise.

Here’s some of our favorites from across the political spectrum, including a smattering of sarcasm:

Putin is shaking in his boots

And a rather noticeable effort to capitalize on the situation:

I am really happy that Hillary made her speech right under Trump World Tower!

There was plenty of meta-snark:

Why is Hillary talking about how much she loves Kenya? — Ben Dreyfuss (@bendreyfuss) June 13, 2015

oh, so she actually is running. I was wondering.

Pretty solid State of the Union address by Hillary.

As well as a Disney Channel observation nobody probably would (or should) have noticed:

Not to mention bits of trivia about the peanut gallery:

Hillary Clinton is kicking off her campaign on an island which used to be an insane asylum and prison. #rooseveltIsland — Justen Charters (@JustenCharters) June 13, 2015

And reflections on the campaign’s official logo, a favorite target of the Internet:

Voting for #Hillary2016 but the campaign logo looks like a sign for a hospital emergency room. #rooseveltIsland @HillaryClinton

But let’s be honest, everyone was thinking the same thing — when would Hillary just break out her rendition of “Domi Arigato, Clinton Roboto”?

Really, did the Clinton Foundation spend that forgotten $134M on a Hillary robot?

So what’s the final Twitter verdict on Clinton’s campaign speech?

My takeaway having not watched the speech is that some people like @HillaryClinton and some people don’t. #analysis — Ben White (@morningmoneyben) June 13, 2015

Only the hardest-hitting of takes on social media.