On Friday night, Rudy Giuliani tweeted out this important message: “Kimim ° has f.”

The tweet was actually a follow-up to a previous tweet talking that read: “Hysterical coverage of Cohen plea. It misses point that, once again like Corsi leaked documents demonstrate, Mueller’s crew has no evidence of collusion. Along the way, however, he is keeping America safe from false statement makers or people with faulty memories or both.” 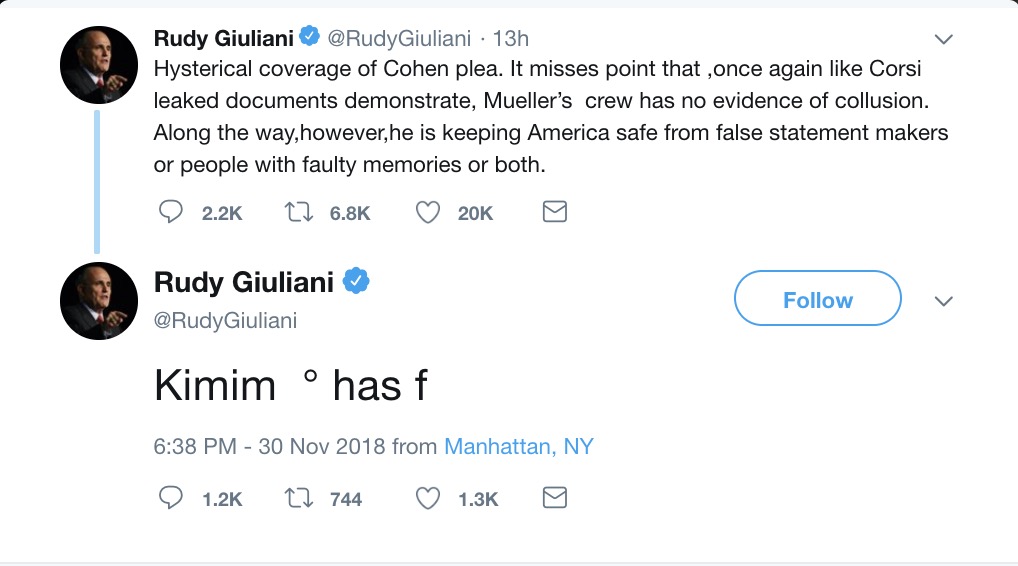 For some reason, as of this posting, the tweet is still up.

This, of course, led to internet speculation about what exactly Giuliani may have meant with his decidedly cryptic and quite likely accidental tweet.

This is voice to text of “Kremlin has facts”.

Others disputed Giuliani’s boggled claims or suggested a correction for his tweet.

given giuliani's track record with the truth I think we can say with a high degree of certainty right now that kimim has probably not f https://t.co/0bfgJegflT

It was only months ago this administration adamantly stated that Kimim ° did not have f. https://t.co/0wsuDmreve

Still others marveled at Giuliani’s ability to butt dial a degree symbol and compared it to Trump’s covfefe moment.

Right? Gun to my head, I’d need a few minutes to figure out the degree symbol. Seems impossible to butt dial that.

Some even suggested it was Giuliani’s best legal advice yet.

This is your best legal advice yet.

So far, Giuliani has neither explained or deleted the tweet.