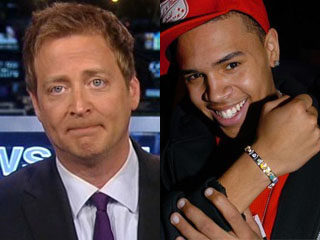 Last night, Twitter proved, in hilarious form, why it has become the preferred form of communication for many in the media: it builds (and burns) bridges among celebrity worlds in ways no other medium can. Red Eye ombudsman Andy Levy has never been a stranger to the occasional Chris Brown domestic abuse taunt, but last night, he finally got the troubled R&B singer to block him, and launch an onslaught of angry tweets from enraged fans who had no idea it was common for cable news personalities to use Twitter.

The offending Tweet came late last night as a retweet, in a style Levy had commonly employed before, though previously undetected by Brown himself:

The tweet apparently rankled Brown enough to cause him to block Levy, but not before replying with a message of his own, which Brown’s fans were quick to spot:

That a late-night Fox News personality somehow got into a Twitter spat with an infamous R&B celebrity would have already been newsworthy, but it is really the fans that make this a true comedy. Here is @AndyLevy’s Twitter stream.

While most of the tweets in the stream involved barely-thought-out grammatical nightmares like “your dumb” or “grow up already how old r u,” there are a few stand-out themes: that Levy was on To Catch a Predator (because he’s “too old” to be on Twitter), that he is gay, that his dislike of Chris Brown is symptomatic of being an employee at Fox News. And then there are Chris Brown fans calling for someone to “punch [Levy] in the face” and warning that he may “get robbed,” which sort of go to prove his point. A notable side feud also erupted in the feed of Red Eye pal Anthony Cumia, who vented his frustration out at Brown fans far more vocally (and profanely) than Levy did.

For the sort of incorrigible media junkie that reads our website on a routine basis, it may be difficult to realize that there is a part of the American populace that neither knows who Andy Levy is nor have ever seen Red Eye and also see in Chris Brown a role model and talented individual worth fighting someone like Levy over. Conversely, for the sort of passionate millennial hip-hop fan that would go to war over an “old man” picking on a voice of your generation with the charisma of Chris Brown, it may be difficult to understand Andy Levy’s trade and why, despite being a “grown-up with a TV show,” the idea of routinely checking in on Chris Brown to remind him he is an embarrassment would be appealing. Surely, this is the stuff John Edwards “two Americas” speeches are made of.

Unlike, say, the routine Bill O’Reilly-[insert rapper here] feuds we all know and love, this one wasn’t pursued on television, prompted by some sort of perceived indecency in earnest (not that domestic violence is decent, but Levy is certainly not the social conservative type to lecture on morals), nor was it so… democratic. In 24 hours, the story became much more about comical tweets from unknown fans than anything Levy or Brown have said, and it doesn’t seem to be going anywhere as of press time. But the real moral of the story? There are so many people on Twitter in 2011 that it’s possible to use the social network with full ignorance of the existence of an entire population on it. Unfortunately for these two social spheres– but fortunately for us– their ignorance of each other, thanks to one tweet, cannot be repaired.