Van Jones Implies Conservatives Want To Revert Back To Slavery, Women Not Voting 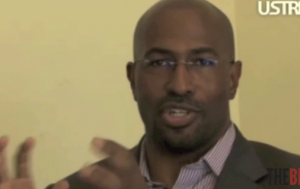 Van Jones has some strong opinions — and he didn’t shy away from expressing them during an interview with allhiphop.com on Tuesday. Jones said some Americans are looking to the past. And those people want to, ahem, conserve the past like things like slavery, women not voting and children working in factories, while others want to progress.

Speaking of the past, Jones said:

By contrast, he said, there are those who want to progress:

“And then you have people who say ‘no, we can be a better country than this,‘ let’s progress, ahem, let’s progress beyond those old hateful ways. And so that’s always been a debate and a divide, but you know the people who are trying to make America progress always win in the end.”

People like Glenn Beck and Andrew Breitbart thrive off half-truths, he said. Responding to remarks that he’s a 9/11 truther, Jones said, “You can go and see it’s not true, but in their little information bubble the facts haven’t…they’re still tricked. It’s like they live in Ashton Kutcher world. You know what I mean? They’ve just been ‘punked’ and they don’t know it.”