Van Jones: Obama Let Tea Party ‘Set Him Up’ By Being ‘So Bipartisan’
video

Van Jones: Obama Let Tea Party ‘Set Him Up’ By Being ‘So Bipartisan’ 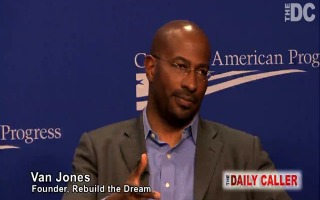 According to a report in The Daily Caller, in an April 20 talk with the Center for American Progress, former White House advisor Van Jones said that the President Barack Obama allowed the tea party movement to “set him up” by being “so bipartisan.”

Jones was promoting his book, Rebuild The Dream, when he told the audience that the tea party was the first to recognize that someone had to be blamed for the economic crisis in 2009 and if “Democrats weren’t going to point at the financial elites, they were going to point at the government elites.”

Somebody got to get blamed, and part of the problem with the president was by being so bipartisan and trying to not, you know, try to be one country about everything, he let his opponents set him up.

So, there he is, standing there with a whole bunch of problems next to him, now he’s either a UN rescue worker or the unabomber, right? I mean, what is he? Is he the person that caused it, or is he the person who’s fixing it? Well, if you can’t, in that same frame, point to the person who’s causing it, it’s easy for you to get set up and that’s what happened to him.