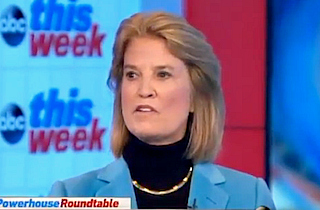 Confirming that “yes, this is news,” Fox News host Greta van Susteren agreed with her network’s decision to post the full, unedited footage of Jordanian pilot Muath al-Kasaesbeh‘s immolation death, a controversial call that was soon followed by other conservatives sites. The rest of the networks declined to show it for fear that they would be essentially participating in ISIS’ propaganda efforts, something for which Fox media critic Howard Kurtz criticized the network last night.

“I don’t know what our leaders should do or not do — this is not an easy problem — but leaders should start with the facts, nothing sugar coated, but the facts,” van Susteren wrote in a blog post Thursday morning. “You get the facts with first hand knowledge.”

“Frankly, I think our leaders should watch it start to finish,” she added. (President Barack Obama said in an interview Sunday he had seen the previous ISIS videos.) “I don’t think world events should be sugar coated so that our leaders don’t face them.”

Van Susteren pointed out the video was not aired on the network, and nobody was forced to watch it. “Watching this video was 100% choice,” she wrote. “It was not as though you were watching Andy of Mayberry and suddenly up pops the most grotesque and evil video.”

Van Susteren did not address the propagandistic aspect of posting the video, nor did she include the name of the pilot, as many conservative sites failed to do.