Video Game About North Korea Is Either Victim of Sony-Style Hack, or Pulling Elaborate Hoax 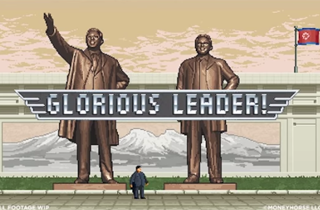 An indie game developer was forced to cancel its latest game, Glorious Leader!, after it fell victim to what its creators described as a “opportunistic copycat” hacker who destroyed their data and locked them out of their own computers.

“The hackers destroyed data pertaining to Glorious Leader! and other projects we had in development and locked us out of our own computers and wesbite,” the developers at Money Horse wrote on their Kickstarter page announcing the cancellation. “The timing couldn’t have been worse as it hampered our ability to attend to the Kickstarter project.”

Glorious Leader!, which was announced back in May of 2014, lets players take on the role of Kim Jong-Un and kill American invaders, with help from a unicorn and Dennis Rodman. Its notoriety increased in September, when it added a new level in which players could launch an assault on the Sony studios and kill Seth Rogen.

At first, the stunt brought them lots of press attention — but the developers say they were soon targeted by hackers, who took over their web page and threatened to release the information of their Kickstarter investors. “We are sure that this is a hoax perpetrated by amateurs. We have NO reason to believe that this was done by the GOP or anyone affiliated with North Korea,” they wrote at the time, promising to beef up their security.

A month later, they gave up completely. “The hackers destroyed data pertaining to Glorious Leader! and other projects we had in development and locked us out of our own computers and wesbite,” they wrote in the announcement of the game’s cancellation. “The timing couldn’t have been worse as it hampered our ability to attend to the Kickstarter project. We realize that we also made mistakes in our pledge levels and rewards. It is now evident that our funding goals will not be met, so we are cancelling our Kickstarter campaign.”

UK security firm Foursys has doubts that the hacks were perpetrated by North Korean sympathizers — or that there were any hacks, for that matter:

Is it really likely that the developers had no backups of its source code and other data? Pointing the finger of blame at North Korea, or copy-cat hackers inspired by the Sony Pictures hack, seems awfully convenient for a failed Kickstarter campaign.

There’s enough doubt as it is that North Korea was behind the Sony Pictures hack, let alone that anyone would care enough to target a tiny games developer.

If I was a cynic, I might question the entire story of the Glorious Leader hack — and think that it was a desperate attempt to raise publicity for a game that was failing to reach its goal.

Watch what could have been below: