Video: What Do Nazi Tea Party ‘Infiltrator’ And GOP Gov. Nikki Haley Have In Common? 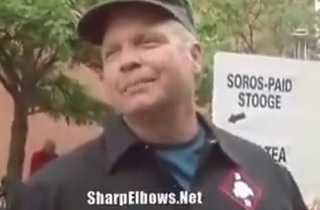 A recent blog feud between Wonkette’s Rebecca Schoenkopf and Gateway Pundit Jim Hoft has exposed an interesting intersection between the Tea Party’s relationship with Nazis and Governor Nikki Haley‘s (R-SC) relationship with a white supremacist (now-former) campaign appointee. Hoft made a bet that no one could find an example of “Nazi symbols – carried by Tea Party activists,” and when Wonkette produced that proof, Hoft refused to pay up. In the ensuing Twitter dustup, Hoft co-bettor Andrew Marcus provided a clip, from his movie Hating Breitbart, that perfectly illustrates the problem that the Tea Party and Haley share.

The details of the Hoft/Schoenkopf feud are amply, amusingly explained here and here, but the upshot is that the DSCC sent a fundraising letter that said “At one Tea Party rally this week, mobs chanted “Waterboard Obama, Waterboard Hillary! At another, radicals waved signs with Nazi symbols.“

Hoft declared that “Of course, this did not happen. Anywhere,” and offered to pay $3,150 for “evidence that there were ‘Nazi symbols’ at any of the Tea Party rallies held last Tuesday.”

Well, the New York Times reported on both the Nazi symbols and the waterboarding chants, and the Wall Street Journal provided the photographic evidence, and Hoft promptly… declared victory. It was a stupid bet to begin with, because it is a well-known tendency of the Tea Party to use Nazi imagery in order to smear opponents, including Republicans like Karl Rove. In fairness, the Tea Party and the right do not have a monopoly on this device, but they’re the ones who made the bet.

In defending the Tea Party against their proclivity for Nazi imagery, Hating Breitbart filmmaker Andrew Marcus pointed to a video by SharpElbows.net, which is included in Marcus’ film. The clip shows SharpElbows.net’s Adam Sharp haranguing a man in a shirt with a swastika and SS imagery. There are a great many ironies in this clip, but I’ll keep it limited to two particularly striking ones.

First, the video accuses the man in the Nazi shirt of being an “infiltrator,” someone whose attendance at the rally has been staged to make it seem like the Tea Party attracts Nazis. However, in most of the clip, there’s a Tea Party member with a pre-printed sign accusing the Nazi of being a plant, which could lead a cynical person to think maybe the guy’s visit was staged by the Tea Party.

But the greater irony is that this video also proves the consistent knock on the Tea Party, and its Nazi-referencing ways. Comparing one’s opponents to Nazis serves the dual purpose of trivializing the horror of the Nazis, and conveying an unserious level of derangement. In this video, even as Adam Sharp is chasing the Nazi guy out of the rally, he’s trying to tar President Obama by association, asking the Nazi if he goes to Reverend Wright’s church. He then agrees that “the Democrats” sent the Nazi, and later, calls the man’s SS logo “disgusting,” the same logo that Hoft and Marcus are defending when it’s used to call an opponent a Nazi. The Tea Party seems to want a Scooby Snack for being mean to an actual Nazi, while reserving the right to use their symbols to smear opponents.

To cap it all off, that pre-printed sign that the Tea Party activist is pointing at the Nazi says “Soros-Paid Stooge” on it. That’s right, in their Nazi-reference-defense video, the Tea Party is accusing a Holocaust survivor of paying a Nazi to make his opponents look bad:

What does this have to do with South Carolina Governor Nikki Haley? At the beginning of that clip, the Nazi guy tells Sharp that he’s a member of the Knights of the Ku Klux Klan, and of the Council of Conservative Citizens. That’s the same white supremacist group that now-former Haley campaign appointee Roan Garcia-Quintana belongs to.

In both cases, the immediate reaction has been to become defensive, point the finger elsewhere, and try to put some distance between the party (Tea and/or Republican) and the racist in their midst. That Nazi guy at the Tea Party rally was clearly attracted to that rally by something, just as Haley’s campaign, and the Republican Party, drew Garcia-Quintana to their flame. Unless and until these movements find out where their interests intersect with people like this, they’ll continue to have problems like this to fix.