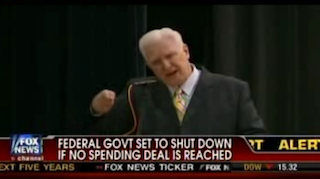 You know how you get all stressed out before you go on vacation? Like with all the packing and planning and stuff? I guess that’s how folks in the government feel now that we’re hurtling towards a shutdown. One victim of the stress appears to be Rep. Jim Moran (D-VA), who let the tension get the best of him in a town hall meeting last night. A man who identified himself as a 27-year military veteran charged Moran with wasting time answering questions when he should be in Washington. In his response, Moran called the comments “caustic” which set the veteran off. After he interrupted Moran, the Congressman angrily yelled at him to sit down or leave.

Ok, while this video is getting breathless reporting throughout the Conservative blogosphere and numerous airings on Fox News, something should be said in Moran’s defense. This guy’s “question” was less “How can you fix this?” and more “How are you gonna screw this up more, idiot?” (only 10 times longer) so it’s understandable that Moran would be annoyed. Also, you can tell that he wasn’t the only one irritated. You can hear a number people of people saying “sit down” and there’s applause when Moran first starts dressing him down.

Thaaaaaaaaat being said, lets get down to the basics of this. Dude, you’re a politician. Getting pissy and yelling at a military veteran while cameras are running? What are you thinking?! When you’re kissing babies on the campaign trail and one of them spits up on you, do you pick it up and spike it like a football as retaliation? And, seriously, all it takes is a “caustic” question and an interruption to get you yelling? Where do you normally hold your town halls? Sesame Street?

The widely circulated videos of the incident don’t make it clear if there was any further provocation either before or after this exchange. However, from what we can see now, this isn’t exactly a proud moment for Moran.

Check out (one of) Fox News’ reports below: