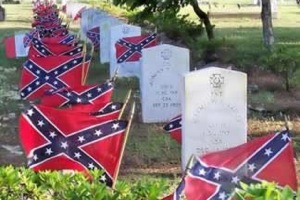 Pack up your Earth Day granola bars and put away the Gaypril leis: April is now officially Confederate History Month in the State of Virginia, as per a proclamation from the office of Governor Bob McDonnell. Understandably, many in the media are now up in arms over the glorification of slavery, racism, and treason, but it’s ok, McDonnell says the move has nothing to do with slavery– it’s only a tourist trap.

The month was chosen for a reason: it was the time during which Virginia first joined the Confederacy, and the weather is great for attending civil war reenactments! Plus, the declaration notes that Robert E. Lee called for unity after his army was crushed into submission, so that’s enough to call him a patriot, right?

There is no way of overstating how offensive a celebration of secession and intra-national collective murder is, even if it is just for the money. But, truthfully, the entire concept of “_____ History/Awareness Month” is outdated and silly, and there’s no way to win with them. Black History Month is the shortest month of the year. Latino History Month isn’t even a month (mid-September to mid-October). The disease awareness months, like Breast Cancer and AIDS Awareness Months, work a bit better because it gives organizations a specific time frame in which to increase their fundraising efforts. But “sorry about that oppression– here’s a month” is simply not a viable way to celebrate what we’ve previously denigrated, which makes “sorry about preventing that oppression– here’s a month” incalculably worse.

Giving that much attention– a state proclamation and entire month– to anything implies a level of admiration. McDonnell’s argument that “this defining chapter in Virginia’s history should not be forgotten” is a point well-taken, but no one is saying the history of the Confederacy should not be taught in schools or erased from memory. There is a very thick line between learning history so as not to repeat it and celebrating a culture that for so many Americans represents the destruction of family and ethnic identity via slavery, and for all Americans evokes the memory of unparalleled national divisiveness.

UPDATE: Former Virginia Governor Doug Wilder just visited MSNBC to comment on the matter, and he is not happy with the proclamation, especially the absence of a mention of slavery in it: