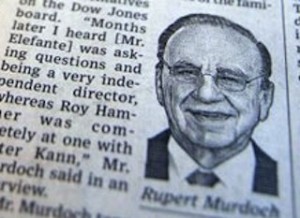 One of the more fascinating secondary narratives that has arisen from the phone hacking and corruption scandal that has enmeshed News Corp. is the way in which the many media properties under Rupert Murdoch‘s purview have covered this story. Perhaps because the story is still very much in a fluid state, the critiques of the reporting have been both up and down. But the recent defense penned by the Wall Street Journal editorial board is the most full-throated defense yet, and takes the unique approach of actually attacking News Corp. critics.

Mediaite has pointed out a number of examples of smart and aggressive coverage by News Corp. properties, and even CNN’s Wolf Blitzer has reported that there is no story with the way that Fox News has reported on the News of the World scandal. There is, however, the odd example of Fox and Friends method of coverage, which somehow conflated the hacking of various corporations with the alleged hacking pulled off by their once corporate brethren in the U.K.

But to date, no outlet has taken a vigorously aggressive tack toward critics of News Corp. in this still-brewing scandal. Until now, that is. What’s that old saying? The best defense is a good offense? Since publishing, various blogs and Twitter users have openly mocked the column. While it’s worth reading the entire piece, here are some selected highlights for your reading pleasure:

The old “It’s the police’s fault for not catching it” defense:

At least three British investigations into phone-hacking and payments to police and others by the now-shuttered News of the World tabloid are underway, with 10 arrests so far. News Corp. and its executives have apologized profusely and are cooperating with authorities. Phone-hacking is illegal, and it is up to British authorities to enforce their laws. If Scotland Yard failed to do so adequately when the hacking was first uncovered several years ago, then that is more troubling than the hacking itself.

Yup. The logic here is that the fact that Scotland Yard hadn’t uncovered the alleged crime is a bigger story than the crime itself. How convenient. Next up…

The ironically detached “everyone has been doing this, so how dare you blame our corporate brothers?”:

It is also worth noting the irony of so much moral outrage devoted to a single media company, when British tabloids have been known for decades for buying scoops and digging up dirt on the famous. Fleet Street in general has long had a well-earned global reputation for the blind-quote, single-sourced story that may or may not be true. The understandable outrage in this case stems from the hacking of a noncelebrity, the murder victim Milly Dowler.

It’s worth noting that the writers included an important hedge of the murder victim at the end of this paragraph, but some skeptics may suggest this was simply a cynical exploitation of the victim.

Finally? Let’s take a shot at the Bancroft family who sold WSJ to the Murdochs, and reportedly expressed regret at the sale:

The prize for righteous hindsight goes to the online publication ProPublica for recording the well-fed regrets of the Bancroft family that sold Dow Jones to News Corp. at a 67% market premium in 2007. The Bancrofts were admirable owners in many ways, but at the end of their ownership their appetite for dividends meant that little cash remained to invest in journalism. We shudder to think what the Journal would look like today without the sale to News Corp.

Yes, if not for Rupert Murdoch coming to the rescue, the WSJ would exist in such shambles as to make the current editorial board shudder in reaction. Oddly, the sheer amount of breathless and defiant hyperbole in this column suggests the true nature of the WSJ under Murdoch’s control, which is far more revealing than anything written in this particular essay.