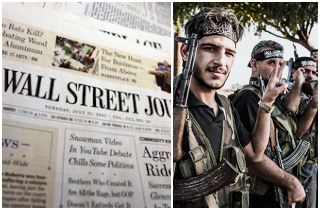 The Wall Street Journal issued a “clarification” on Friday that the author of an op-ed defending the Syrian Free Army—a piece cited by Secretary of State John Kerry and Senator John McCain as evidence that the rebels were not the jihadists some had portrayed them to be—was in fact affiliated with the Syrian Emergency Task Force, a political action committee that explicitly supports the Syrian rebels.

Elizabeth O’Bagy argued throughout the piece that the public had been misled by imprecise reports to believe that Islamic extremists had infiltrated all parts of the Syrian opposition, one of the many reasons for opposition to U.S. involvement, as lawmakers fear they could remove Assad only to empower al Qaeda or similar factions.

O’Bagy disputed this, arguing what radical elements there were had been kept “carefully demarcated” in specific areas:

“Contrary to many media accounts, the war in Syria is not being waged entirely, or even predominantly, by dangerous Islamists and al Qaeda die-hards. The jihadists pouring into Syria from countries like Iraq and Lebanon are not flocking to the front lines. Instead they are concentrating their efforts on consolidating control in the northern, rebel-held areas of the country.

“[…] Moderate opposition forces—a collection of groups known as the Free Syrian Army—continue to lead the fight against the Syrian regime. While traveling with some of these Free Syrian Army battalions, I’ve watched them defend Alawi and Christian villages from government forces and extremist groups. They’ve demonstrated a willingness to submit to civilian authority, working closely with local administrative councils. And they have struggled to ensure that their fight against Assad will pave the way for a flourishing civil society.”

During a hearing in the House of Representatives, Kerry cited O’Bagy’s account of the rebels to support his claim that aiding the Syrian Free Army would not mean aiding radical Islamic groups, part of Kerry’s push to convince a skeptical Congress to approve the authorization for use of military force.

The Journal originally credited O’Bagy as “a senior analyst at the Institute for the Study of War,” and subsequent accounts followed suit. But other writers began to call out the paper for eliding her connection to Syrian Emergency Task Force, a political action committee that supports the removal of Assad. According to their website, the SETF’s goal is

“to support Syrian’s demand for freedom and democracy as well as convey the democratic aspirations of the Syrian people to the American people, and to support humanitarian aid organizations and their efforts in relieving the crisis in Syria. In addition, SETF works to shed light on the crimes committed by Bashar Al-Assad and his regime. SETF’s aggressive lobbying, through engagement with lawmakers, aims to expedite the fall of the dictatorship regime.”

The Arizona senator approvingly quoted a long passage from a garbled Wall Street Journal Op-Ed by Elizabeth O’Bagy, who the paper failed to identify as the political director of the pro-strike Syrian Emergency Task Force, which argued that the Free Syrian Army consists of secular heroes who “will pave the way for a flourishing civil society.”

On Friday, the Journal issued its clarification beneath the article:

In addition to her role at the Institute for the Study of War, Ms. O’Bagy is affiliated with the Syrian Emergency Task Force, a nonprofit operating as a 501(c)(3) pending IRS approval that subcontracts with the U.S. and British governments to provide aid to the Syrian opposition.