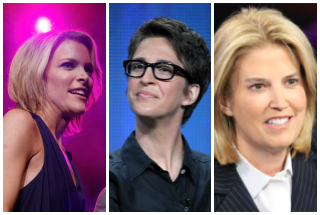 “You’re just a woman with a small brain. With a brain a third the size of us. It’s science.”

Back to the future, Megyn Kelly and Greta Van Susteren are major personalities at Fox News, each hosting shows at 1:00 PM and 10:00 PM, respectively. Kelly is a former lawyer who performed so well as a guest that she was given her own show (a growing trend). Van Susteren also graduated with a law degree (Georgetown) and was a civil and criminal attorney for years before becoming a legal analyst for CNN in 1991. Each just signed extensions with Fox.

Both Kelly and Greta are cut from the same mold as MSNBC’s Rachel Maddow, an Oxford Rhodes Scholar: Three women who do more than just smile and read a teleprompter. Much more. And all are ultimately paid millions for their strong, passionate, educated opinions (Note: even though Kelly is a technically an anchor, her interview segments often feature her jousting with guests).

So it was fascinating to see Kelly and Van Susteren verbally waterboard their colleagues—Lou Dobbs (Fox Business host) and Erik Erickson (Fox Contributor)—for their Burgundy-esque comments around a new (Pew) study finding 40 percent of American households have a mother as breadwinner.

Erickson claims that kids of working moms don’t fare as well as those with stay-at-home moms.

Dobbs lamented the damage done to society by increased divorce rates and the increase of single-person households.

Erickson (on Dobbs’ program earlier in the week) claimed it is “anti-science” to not believe that men are supposed to play the dominant role in the household (he wouldn’t go the full-Burgundy and say that a woman’s brain is 1/3 the size of a man’s, however).

Kelly had both Erickson and Dobbs on her show Friday, where she was having none of it, “What makes you dominant and me submissive and who died and made you scientist-in-chief?”

Van Susteren followed suit, saying in her blog, ““Have these men lost their minds? (and these are my colleagues??!! oh brother… maybe I need to have a little chat with them if it isn’t too late….)”

Kelly explained to Erickson and Dobbs that 50 and 60 years ago, it was roundly believed that children of interracial marriages were subpar.

“They said it was science, and it was fact,” she explained. “If you were the child of a black father and a white mother or vice versa, you were inferior and you were not set up for success. Tell that to Barack Obama.”

Over at MSNBC, sexist comments made on-air by its male hosts have been a problem in the past. In the past, Chris Matthews has called Hillary Clinton—now seen as an MSNBC savior–“She Devil,” “Nurse Ratched,” and “Madame Defarge.”

He’s also offered up this perspective:

Keith Olbermann—obviously no longer with the network—has referred to Michelle Malkin as “a big mashed-up bag of meat with lipstick on it.”

And through the years, we haven’t seen the men of MSNBC taken to task by the network’s female hosts/anchors the same way Kelly and Van Susteren just did in blasting Dobbs and Erickson. Rachel Maddow certainly isn’t shy on taking on anyone, particularly Republicans during its whole alleged War on Women during the 2012 campaign. But since coming a major star on the network in 2008, she’s been oddly silent after the likes of Matthews, Schultz or former BFF Olbermann made their unambiguous comments about women.

Mika Brzezinski of Morning Joe is also a prominent woman on MSNBC. At a reported $2 million per year (as opposed to co-host’s Joe Scarborough’s $4 mil), she’s also is there to primarily serve as opinion-maker. But like Maddow, Mika hasn’t challenged Matthews or Schultz (or Olbermann in the past) despite being given ample opportunity to do so on her three-hour daily show (on cue, she did recently slam Fox’s Dobbs and Erickson).

Given Maddow and Mika aren’t afraid to offer perspective on anything and everything, what’s been holding them back from taking their male counterparts to task in the past?

Is there a commandment from above at 30 Rock that mimics the old Reagan line, “Thou shall not speak ill of any Republican”…with “Republican” replaced with “MSNBC employee”?

At Fox News, they’re willing to attack each other based on their principles and perspective.

All while MSNBC—a network built on opinion, home of the War on Women—won’t, or can’t, do the same.