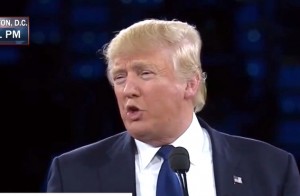 Following his meeting Monday with the Washington Post editorial board, the paper’s conservative columnist Jennifer Rubin published a damning piece of Donald Trump‘s foreign policy positions, writing: “Hard as it is for Republicans to imagine, Trump would be worse for our allies, worse for the cause of freedom, worse for stability in the Middle East and therefore worse for U.S. national security than Obama.”

“To a greater degree than President Obama and certainly Hillary Clinton, Trump looks upon allies as a burden,” Rubin wrote, and described his “world view [as] entirely at odds with that of the pro-Israel community.”

She witheringly described his speech at AIPAC Monday — notable for the fact that The Donald traded his typical improvisatory, meandering style for a prompter — as full “of red meat and standard-fare applause lines,” but doing little to allay the fact that his “position on major issues is fuzzy if not incoherent.” She concluded:

The problem, of course, is that one needs more than a teleprompter to get through a campaign and to serve as president. Trump again and again demonstrates that without getting lines fed to him by a teleprompter he lacks a coherent world view, an understanding as to how the United States needs to project its influence (or even whether it should do so) and respect for American democratic traditions. As he careens through the primaries, ripping the GOP asunder, tearing at the fiber of American democracy and living up to his image as an arrogant bully, Republicans should understand how many voters will flee to the outstretched arms of Clinton, warts and all. If Trump is the best the GOP can come up with, it deserves to be beaten — badly.