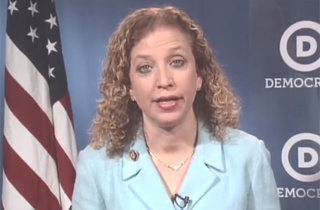 Rep. Debbie Wasserman Schultz (D-FL) today denied accusations that she asked a major Democrat donor to retract some mean comments he made about to Politico, offering in return to change her political position on medical marijuana.

Evidence of DWS’s pot influence peddling were published in Politico last night, but require some context: earlier this week, Politico published a harsh article in which the Florida medical marijuana lobby vowed to destroy Wasserman-Schultz if she decided to run for Marco Rubio’s Senate seat, as payback for her longstanding anti-decriminalization record. One Dem donor in particular, lawyer John Morgan, had some cruel words for her:

“This will be a major campaign issue and I think disqualifies her from the nomination,” Morgan said by email, comparing the issue to gay marriage, which is far less popular in polls.

“A United States senator from the Democratic Party should be in favor of the decriminalization of marijuana as a base test. Debbie is more severe,” he said. “Her position denies terminally ill and chronically ill people compassion. She was an anomaly among [Democrats]. The war on drugs was lost about the same time we lost the Vietnam War. Generations have been arrested, jailed and careers and dreams lost forever.”

Morgan certainly has some interests at play here: he spent nearly $4 million of his own money on a campaign for a medical marijuana ballot initiative last year, one that would have amended Florida’s constitution but was killed by merely 2.4% after Wasserman-Schultz staunchly opposed the campaign. But after his comments were published in Politico, the DWS team allegedly sprang into action, according to Politico’s followup article:

In the meantime, Wasserman Schultz’s office sprung into action. Her team reached out to the campaign manager for the medical marijuana initiative — Ben Pollara, a top Democratic fundraiser and consultant in Miami — and offered him a deal.

Pollara, who refused to comment, detailed the offer in an email to Morgan a few hours later, the donor said, with the subject line: “DWS.”

“In a tizzy over this politico story. Saying she might be willing to support new amendment. Any chance you’ll retract your statement,” Pollara wrote.

Morgan responded about two hours later in his email calling her a “bully.”

The congresswoman quickly denied that she’d offered to change her position in exchange for sweet, sweet donor money. “I wouldn’t change my position in exchange for support under any circumstances – ever,” Wasserman-Schultz told the Sun-Sentinel in response. “I stand on principle. I’m always very proud to stand in front of my constituents and explain when I have a difference of opinion with them.”

She then offered a complex response about how her office had reached out to Pollara in hopes of discussing whether they could write up better language around another marijuana ballot initiative, adding that she disapproved of the “loosely drawn” language of Morgan’s initial draft. “I’ve seen the language that they’ve proposed for the 2016 ballot,” Wasserman Schultz said, adding that she was feeling somewhat better about their proposal. “I wanted to see if, before battle lines were drawn again, we could start a conversation.”