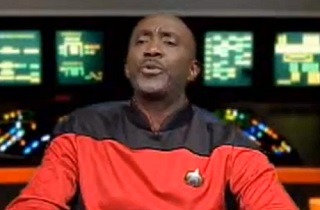 Attkisson, who gained hero status among right-wingers for her deep dive into the “Fast and Furious” rabbit hole, managed to dig up the IRS video using a Freedom of Information Act request, which was a good pull. In need of an easy news hook, Attkisson sells it with a sequester peg:

It’s not likely to go over well with some Americans and members of Congress, especially since federal agencies have been complaining that it’s difficult to find trims under forced sequestration.

Why don’t you let us be the judges of how well this spoof goes over with Americans?

First, let’s talk about what the video gets right. The sets are pretty good, and just when you’re destroying them in your mind about the anachronistic uniforms, the film slyly lampoons them. They also get in a dig at the ridiculous Next Generation series by calling their ship the “Enterprise Y,” when we all know there’s only one real Enterprise, and one real Star Trek. From a training standpoint, the film is lacking, but it does effectively illustrate the challenges the agency deals with, and tees up the concepts of the conference in a fun, engaging way. It was also created in 2010, when “sequester” was still something you only did to juries.

Now, for the bad part. From Sharyl Attkisson:

“Back in Russia, I dreamed someday I’d be rich and famous,” says one crew member in the parody.

“Me too,” agrees another. “That’s why I became a public servant.”

And the two fist bump.

No, that’s not it. See, Earth-people often employ a form of humor called “sarcasm,” in which the practitioner says the opposite of what is meant in order to subvert the expectations of the listener. Fascinating.

For me, the outrageous part is this:

A separate skit based on the television show “Gilligan’s Island” was also recorded. The IRS told Congress the cost of producing the two videos was thought to be about $60,000 dollars.

Sixty thousand dollars for this six-minute Star Trek video and a Gilligan’s Island skit? Are you kidding me? Do you know what it costs just to produce a 30-second commercial these days, or even five years ago?

It is outrageous that the IRS isn’t producing more videos like this. They could’ve hired a union cast, paid me a hundred grand to write it and bring along some decent microphones, and still have come in at half that number. Hell, they probably could have gotten Jack the Giant Slayer done for a cool mil, and saved Warner Brothers a boatload of cash. Sixty grand? The Pentagon spends that on money wrappers for all the other money it spends.

Aside from that, even this poorly-executed Trek parody is a lot more fun to watch than anything else the government puts out. If President Obama gave his weekly address from the bridge of the Enterprise, we’d probably already have unniversal health care and a national handgun registry. The government should be making Star trek videos for everything.

While the IRS did sort of apologize for the Star Trek video for not being more training-focused, they stood by the video program in general:

IRS Acting Commissioner Steven Miller said in a statement that one of the two videos was played in 400 locations and saved taxpayers $1.5 million over what it would have cost to train employees in person.

Nonetheless, the IRS issued a statement that reads: “The space parody video from 2010 is not reflective of overall IRS video efforts, which provide critical information to taxpayers and cost-effective employee training critical to running the nation’s tax system. In addition, the IRS has instituted tough new standards for videos to prevent situations similar to the 2010 video.”

Perhaps my favorite part of this whole story is Miller’s comically litigation-avoiding reference to the Star Trek bit as “the space parody.”

I’m glad Sharyl Attkisson dug up this bit of silliness, because it perfectly illustrates the mainstream media’s absurd sense of perspective about the sequester. You expect the likes of The Daily Caller to hoot and fling poo over a program that actually saves taxpayers money, while ignoring the truly devastating effects of the sequester. You should expect more from the mainstream press than to just play along.