What Is Obama Doing Calling Out Rush And Beck Personally? 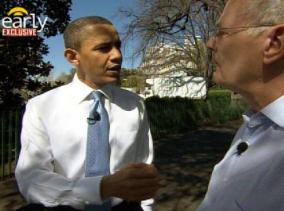 The walk-and-talk and in-game chat revealed an interesting exchange between anchor and President about talk radio – which Pres. Obama felt the need to call out specific hosts personally.

It began with Smith lobbing the pass up in anticipation of the Pres. Obama alley-oop. “The kindest of terms you’re sometimes referred to out in (pause) America is a socialist, the worst of which I’ve heard is called a Nazi,” he said, strangely pausing before saying ‘America’ for emphasis. “Are you aware of the level of enmity that crosses the airwaves that people have made part of their daily conversation about you?”

And then it was time to slam it down. Yes, Pres. Obama is aware of it, in fact…

Obama: When you listen to Rush Limbaugh or Glenn Beck…
Smith: It’s beyond that.
Obama: It’s pretty apparent. it’s troublesome.

What reason does the leader of the free world feel it is appropriate to personally call out radio and TV hosts, even if they are, perhaps, some of the most powerful media figures in the country? And this isn’t the first time, going back last year and during the 2008 election.

It certainly provides some red meat for Limbaugh, Beck and their supporters – it ensures the exchange will be replayed and rehashed for the coming days and weeks. (Can you see Rush saying, ‘Here’s what’s pretty apparent, Mr. President!…’) Surely he understands this will only elevate their platform and increases their power. Perhaps he feels that he benefits somehow by their consistent anti-Obama stance.

But by this particular sitting President using Beck and Limbaugh’s names, it indicates one of two things – he either, at least occasionally, tunes into their TV or radio shows (a surprising, but interesting prospect) or he has no idea, ultimately, what he’s talking about regarding the content of these programs. To ardent supporters of Pres. Obama – which one is better?

Here’s the key segment, and on the next page, check out some basketball (and Harry Smith’s “go to your right” joke):

>>>NEXT PAGE: Check out a preview of Pres. Obama’s basketball skills.