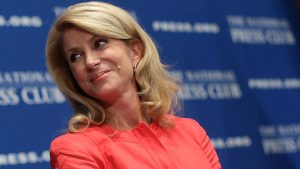 Amidst heated debate about the Democratic party, its future, and if that future should include anti-abortion Democrats receiving party backing and funding, former Texas state senator and gubernatorial candidate Wendy Davis recently weighed in on the issue in an interview with Elite Daily.

But Davis, who rose to fame by leading an epic filibuster to protect abortion rights on the floor of the Texas senate, wanted to make one thing clear in the interview — there’s a difference between having personal qualms with abortion, and wanting to transform those personal qualms into the law of the land, and impose them on others.

“I have no problem with the Democratic party getting behind someone whose personal beliefs are at odds with abortion,” she told Elite Daily. “What I have a problem with is when a person allows their personal belief to interfere with a woman’s right to make private decision about her own bodily liberty and autonomy for herself. That’s where I would draw the line.”

It’s a point that seems to be lost on Democratic leadership, who are convinced that selling out women’s rights like political bargaining chips will somehow be more successful in grabbing votes than — oh, I don’t know — trying to get more women, minorities, and other less-than-active voting blocs to the polls with an aggressive progressive agenda.

Davis is able to draw the line because, unlike those in her party who have been speaking about the issue lately, she understands that these are women’s human rights, and you have to “draw the line” to protect these rights who want to take them away, just because of their personal beliefs.

But in the same vein, while it was refreshing to hear a Democrat come out firmly against other Democrats who may want to legislate away women’s rights, it was a little bit concerning for me, at least on a personal level, to hear that Davis is alright with candidates who are personally opposed to abortion.

Considering how hotly under attack abortion rights are in state legislatures across the country — and being from Texas, she should know this better than anyone — it doesn’t serve women for the Democratic party to throw their support behind people who are ambivalent about protecting abortion rights, who aren’t going to be proactive about working to expand access. People who personally oppose abortion, even if they respect women’s legal rights to have the procedure, aren’t going to fight for access to it.

Nevertheless and very importantly, Davis pointed out what so many Democrats rallying against “identity politics” and “divisive social issues” frequently miss — abortion and reproductive rights are an intersectional issue, one that affects women’s ability to pursue education and careers, one that affects public health and the national economy.

We should not be having this political debate in the 21st century, that women’s bodily decisions should be dictated by the state. This should not be a partisan issue.

But the fact remains that, for whatever reason, it is one. And until we reach a point where it is no longer, Democrats have to be the party that actively sides with women — not the party that sits idly by while anti-abortion Republicans in rural states introduce bill after bill to make abortion access harder and harder, and most definitely not the party that helps Republicans.