What Will The Media Cover Without MA Exit Polls? The Lack Of Exit Polls!

What Will The Media Cover Without MA Exit Polls? The Lack Of Exit Polls! 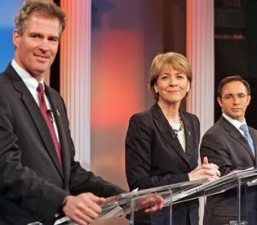 With everyone clamoring for information on today’s Senate race between Martha Coakley and Scott Brown, journalists, anxious Democrats and political junkies of all sorts will have to do without traditional exit polling, Politico and the Wall Street Journal are reporting. Interestingly enough, we might see coverage of the lack of exit polling replacing standard election day cover of the actual exit polls. And come poll closings at 8 p.m.? A lot of guesswork.

Mike Allen at Politico, in his morning Playbook round-up, called it “A Day Without Data,” writing that there would be no exit polls because “just nine days ago… the Boston Sunday Globe carried the banner headline, “Senate poll: Coakley up 15 points.” In other words, there would be no need for the usual army of statistical guessers because there would be no question. Until there was, and now we’re left biting our fingernails.

Following up, the Journal noted that “many of the usual accoutrements of closely-contested elections are missing in the Bay State.” That includes an absence of “absentee ballot fraud, the preferred method of putting an illegal thumb on the scale in a close race,” and as a result lawyers have been assembled all over the state at key voting locations. Most notably, 25% of the state said “yes,” ACORN might try to steal the election for Coakley.

With even poll wunderkind Nate Silver putting Coakley’s chances around 25% to beat Brown, Democrats — hoping to cling to a 60-vote super majority — will be closer to the edge as the suspense builds and they hold out hope for a comeback. As a result, and with every major poll favoring Brown entering the day, the media narrative we’re likely to see in the face of no semi-solid exit poll data is an inevitable Brown victory, at least until the returns start to trickle in. It could be a long night for those paying attention, but it will be a quiet afternoon and evening.