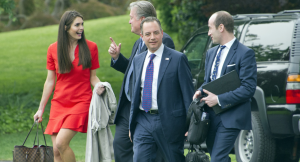 In the aftermath of former White House Communications Director Anthony Scaramucci‘s swift fall from grace, numerous names have since been floated for potential successors, but on Wednesday, the administration named Hope Hicks, 28, the interim communications director, who will also help search for a permanent hire.

Hicks is reportedly Trump’s longest surviving staffer from the campaign trail, brought on in January 2015, but quite unlike Scaramucci, she’s known to be a woman of few words. That might just be why she isn’t rabidly detested by the right or the left. She hasn’t gone on CNN to spew out the term “alternative facts” and offer ludicrous, offensive justifications for her boss’s worst statements and behaviors.

Hicks is a young woman who formerly worked as a model and actress, and then at a public relations firm who wound up employed by Ivanka Trump. There isn’t enough known about her to hate her, although when she first entered the national spotlight, her work for Trump yielded a number of think pieces critical of how her youth, conventional attractiveness, and apparent quietness all offered a gross image of what Donald Trump wants in female employees, and how female employees who want to stay employed by Trump should appear and behave.

But in either case, that could all soon change.

As his communications director, however long this may last, Hicks will have to talk. She’ll have to answer difficult questions about her boss, made all the more difficult by the president’s often indefensible words and actions. How do you defend encouraging police brutality? Equating white supremacists to left-wing progressives? How do you justify knowing nothing about the American health care system and how much health care costs? Playing chicken with North Korea?

Hicks had better have some ideas.

Nevertheless, now that she has the job, prepare for the wave of bipartisan think pieces praising the advancement of a young woman in the ranks of a male-dominated White House that will inevitably break the internet, while also preparing for Hicks to inevitably defend a sexist comment or policy by Trump within days.

Of course, that’s not to say Hicks is necessarily an awful, soulless person — that’s just how it is in the Trump administration. It can serve to benefit individual women — think: Ivanka, Sarah Huckabee Sanders, Kellyanne Conway, Betsy DeVos — but only on the condition that these women sell out other women in the process.

Women in the Trump administration are simultaneously Trump’s enablers and his tokens to wave around like objects if anyone accuses him of sexism. They’re the ones he’ll send on stage to explain to other women why they’re losing health care, or why it doesn’t matter that the president routinely makes gross comments about women’s appearances.

But nonetheless, if Hicks is promoted to be the next White House communications director, then good for her. What a feminist victory that would be.