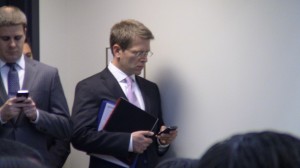 It was just over a month ago that former print journalist Jay Carney took over as White House Press Secretary from Robert Gibbs, and what a month it has been. With multiple crises in the Middle East, the budget fight, the Wisconsin-led public union protests, and Japan’s earthquake/tsunami/possible nuclear meltdowns, Carney has had many full plates to deal with. All things considered, the White House reporters I’ve spoken with give Carney good marks on his first month on the job, which several of them describe as a “trial by fire.”

On the occasion of Carney’s Monthiversary™, I asked several of my White House colleagues how they thought Carney had performed thus far. CBS Radio’s Mark Knoller, whom some are now calling the new “Dean of the White House Press Corps,” says, “I think he’s up to speed. He seems increasingly at ease at the lectern and sure of himself.”

“He speaks with authority for the President,” Knoller continues, and says, hitting a theme that several of our colleagues touched on, “(Jay) is careful not to say more than he knows.”

I also asked Knoller the biggest difference between Gibbs’ tenure and Carney’s, to which he replied, “The pastel ties are gone.”

The West Wing Report’s Paul Brandus says it’s “encouraging that Jay is briefing almost every day. I think after awhile, Gibbs got kind of tired of it,…maybe Jay will cut back, but it’s encouraging that he’s briefing so often now.”

There’s another big difference between Carney and Gibbs, according to Brandus. “Gibbs was a longtime confidant of the President’s, while Carney is not, so he has to build that relationship (with Obama), and that will take a fair amount of time, so there’s a learning and growing curve.

“His mastery of issues…” Brandus pauses, diplomatically. “He comes out with this big, thick briefing book, and he’s always looking things up…he’s being very careful. Gibbs never really had to do that. Maybe Jay’s just being extra-careful, or maybe he’s still getting up to speed on some of the nuance of some of the policy issues. But Gibbs rarely had to come out with props, and Jay has to.”

Brandus also points out that Carney’s caution is well-founded. “What he says in that briefing can move financial markets, and literally impact matters of war and peace.”

One veteran print correspondent echoed expectations that Carney would suffer by comparison to Gibbs’ strong ties with the President. “He has good days and bad, but frankly, on his good days, he’s better at the podium than I ever expected him to be. Especially when you consider the incredible run of news he’s had to deal with, it’s your basic baptism by fire. This would be true of anyone, but Jay just doesn’t have the access that Gibbs did, he and Obama went back so far, (as a result) he speaks with less authority than Gibbs did.”

Carney gets high marks from reporters for a more egalitarian approach to doling out the questions. Christi Parsons, White House correspondent for the Los Angeles Times, Chicago Tribune and Tribune newspaper, says “The questions are better because there are so many more of them. The foreign press and the reporters outside the first three rows pose a more diverse range of questions, and their perspectives and areas of expertise make for a different kind of back-and-forth.”

But the big boys and girls are still getting their licks in, Parsons says. “The front rows are aggressive in an important way, and they get answers that benefit a lot of viewers and readers, but I don’t think they’re getting short shrift under the new order.”

While Carney is seen by most as “spreading the wealth” more equitably than his predecessor, not everyone is quite satisfied. Progressive radio host Bill Press told me, “Jay, understandably, started out a little shaky, but has gained self-confidence and greater command of podium. I’d give him solid B so far. As (a) back-bencher, my only complaint is that he must not let big feet in front rows continue to pose endless string of same questions. Better for everybody when he moves faster.”

What I find most remarkable about Carney’s eventful first month is that, despite a jam-packed string of news cycles, Carney has managed to keep his name out of the headlines, and basically not make any news. While that’s partially a good thing, since press secretaries making news isn’t always a good thing, Carney’s strictly on-message approach does carry with it the risk of rendering the post, and the daily press briefings, even less relevant. Maybe that’s the point, or at least it seems that way from the Jay Carney highlight reel that Politico put together: