Why Are Sarah Palin and Her Death Panels Allowed On The WSJ Op-Ed Page?

Why Are Sarah Palin and Her Death Panels Allowed On The WSJ Op-Ed Page? 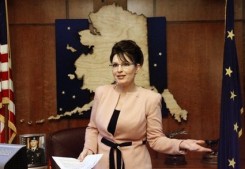 Sarah Palin has found a new home for her health care, death panel rantings: the op-ed pages of the Wall Street Journal! What exactly qualifies the former, sometime Governor of Alaska, and failed running mate for John McCain to speak on the issue of health care remains unclear (energy, was a bit more understandable). Certainly it’s a free country, and the Journal is allowed to publish whatever they like, but there isn’t there also a implicit understanding and trust on the WSJ reader’s part that the writer know what they are talking about?

Beyond the ability to manipulate the national message from her extremely popular Facebook page Sarah Palin has yet to prove she is credible enough to speak on this issue, in what is presumed to be one of the more credible forums out there. Does this mean the Wall St. Journal agrees that it’s factually accurate to suggest President Obama’s health care bill includes a death panel provision?

Then again, times are tough in newspaper land…maybe the Journal is not above succumbing to the siren call of clicks (or Rupe’s influence?). Actually, I suspect that’s exactly what happened. And this will get a lot of clicks. And it’s pretty clear that, despite Marc Ambinder‘s call to the MSM that they don’t allow Palin to become today’s voice of the GOP, considering the following “death panel” passage, that is exactly what is going to happen.

In an interview with the New York Times in April, the president suggested that such a group, working outside of “normal political channels,” should guide decisions regarding that “huge driver of cost . . . the chronically ill and those toward the end of their lives . . . .”

Given such statements, is it any wonder that many of the sick and elderly are concerned that the Democrats’ proposals will ultimately lead to rationing of their health care by—dare I say it—death panels? Establishment voices dismissed that phrase, but it rang true for many Americans. Working through “normal political channels,” they made themselves heard, and as a result Congress will likely reject a wrong-headed proposal to authorize end-of-life counseling in this cost-cutting context.