Why Is The National Enquirer Wasting Its Shred Of Credibility On This Obama Story?

Why Is The National Enquirer Wasting Its Shred Of Credibility On This Obama Story? 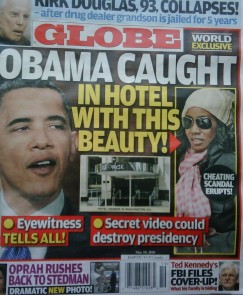 Over the weekend the National Enquirer published an “exclusive” story that said President Barack Obama had had an affair with campaign worker Vera Baker back in 2004. You can read the original Mediaite post here its updated post here and managing editor Colby Hall’s clarification here. And Dan Abrams‘ comment here.

Shortly after the National Enquirer posted their “special investigation” Drudge picked it up and ran it as its lede story for the better part of 24 hours. Needless to say, the Drudge showcase guaranteed the story a level of attention it would not otherwise, and probably shouldn’t, have received.

With that in mind, I want to focus on something I think was missed in the our original posts, which is why the National Enquirer opted to squander the little bit of credibility they had mustered as a result of their Pulitzer Prize eligible John Edwards story, and their fairly accurate prediction of the Tiger Woods debacle, on an old, rehashed Obama affair story that has enough holes in it to drive an army of Mack trucks through.

The short answer of course is sales. Newsstand sales, and online sales, otherwise known as page views, and you can’t hit a bigger page view bonanza than a headline Drudge link. What’s interesting about this is that the Enquirer is standing by their story.

Here is an email we received yesterday from National Enquirer Web Editor Dick Siegel in response to Frances Martel’s second post about the story:

In reference to the online Medialite story which carries your [Frances Martel] by-line:
http://www.mediaite.com/online/national-enquirer-obama-story-update-retracts-hotel-surveillance-claim/

1. The ENQUIRER has NOT retracted the story
http://www.nationalenquirer.com/reports_obama_cheating_scandal_vera_baker_investigation/celebrity/68590
2. The updated story was edited for clarity and the online copy is an abridged version of the original posting
3. The reference to the hotel surveillance video you claim in your story that was omitted is in the online ENQUIRER posting
4. The full unabridged story appears in this weeks Globe magazine cover date May 10, 2010 pgs 30, 31 and 34
5. The ENQUIRER stands by its story.

So! The Enquirer is standing by their shadily sourced story. And I mean seriously, shadily sourced: “An ENQUIRER reporter has confirmed the limo driver’s account [the print version provides an expanded, if equally shady, anonymous account from said limo driver] of the secret 2004 rendezvous and has also learned that on-site hotel surveillance video camera footage could provide indisputable evidence to the investigation.” Yeah, that’s a pretty big could. As in it could provide evidence that campaign workers stayed in the same hotel at Barack Obama in 2004. As in, if we could get video evidence of Roswell, we might be able to prove the existence of aliens (actually, I think that may have been a NE story).

Likely the most reliable part of this entire story is that “that top anti-Obama operatives are offering more than $1 million to witnesses to reveal what they know about the alleged hush-hush affair.” Yes. I think it’s pretty much a guarantee that a whole lot of people would be willing to pay a whole lot of money for some sort of proof (video tape or otherwise) that the president is not what he says he is. Duh. In political terms it’s referred to as “opposition research.”

Interestingly (or maybe predictably), when I emailed Siegel back to ask him to comment on how the National Enquirer is following up on this story, and why the NE has suddenly decided to re-pursue it, or if we can expect the sort of photo evidence that accompanied the Edwards stories? His only response was to confirm that I had the right link to the story.

The National Enquirer currently occupies a strange place at a very strange time in journalism. As has been noted by many others, their big score on the John Edwards story elevated them to the realm of possibly believable (as opposed to grocery line time passer). And they followed this up by being proved right about Tiger Woods…by Tiger Woods, but nevertheless it was a one-two punch they could gloat over.

The differences however, between the Edwards story and this one are striking. For one, the Edwards story was happening in real time and the NE was reporting it as such. They paid to have people follow Edwards round the clock. They took pictures. A lot. And published actual photos of Edwards and Rielle and the baby, together. It was this tenacity and documentation of the facts (sordid though they were) that convinced people the NE, despite their usual fare, should be made eligible for a Pulitzer. None of these things are true here. None. Zero. However, the fact they were right that one time injects enough of a shadow of a doubt to warrant a second glance at this story (and likely make some pols just a tad nervous or a tad excited, depending) and I imagine that second glance was just what they were banking on (maybe literally).

Add to that the fact TMZ.com, the online prodigy of the type of ‘journalism’ the NE pioneered, has broken so many big stories this year, and then add to that a cable and blogosphere that often operates (aka, link baits) in innuendo and suggestion, and what you have a perfect opportunity for the National Enquirer to plunk itself once again squarely into the news cycle, generate a gazillion page views, and hope that with all this blood in the water someone will bite. And the blue dress equivalent will appear. At least that’s my suspicion. Because otherwise this story is the political equivalent to an Elvis sighting, but even less reliable.

PAGE TWO: The print version of the story.