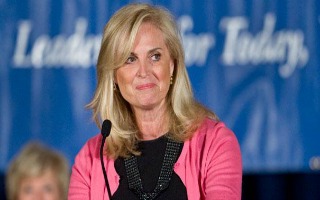 The measured glee with which the media has greeted news that a potential hurricane is barreling down on Tampa precisely as Republican party is set to commence their nominating convention has been, well, predictable. Even accounting for the fact that hurricanes are notoriously volatile, Isaac appears set to impact the west coast of Florida on Monday – just as the convention begins. But the broadcast media had also made a point of ignoring that first convention day when Mitt Romney’s wife, Ann Romney, is scheduled to make an important address. But the storm could revive hopes that Ann’s speech will receive the attention of a broad audience. The impending hurricane, and the speculative run-up to landfall that accompanies such events, could increase marginal voters’ interest in the convention and draw viewers who would otherwise stick with the broadcast networks’ staple sitcoms and dramas.

When news broke that the three major broadcast networks planned to ignore the first day of the Republican convention, despite broadcasting every night of the (albeit truncated) Democratic convention the following week, the usual cries of media bias arose from cynical conservatives. While few would question the near ubiquitous popularity of Hawaii Five-O reruns, the networks probably just cannot afford to lose a full week’s worth of advertising dollars to broadcast the entire convention. Blame revenue projections first before malice – if that’s not a razor yet, it should be.

But the decision by the networks to skip Monday comes as a blow to the Romney campaign. Republicans want to feature Ann Romney prominently in the coming weeks. Not only does she serve to rebut Democratic claims that the GOP is unfriendly to women, she is uniquely suited to neuter attacks on Mitt Romney coming from President Barack Obama’s allies that he is a heartless accountant who is implicitly responsible for a steelworker’s cancer-related death. Ann Romney’s own battles with multiple sclerosis and breast cancer make her a living, breathing counterargument to the tired liberal caricature of Republican politicians as unfeeling plutocrats.

The potential for Ann Romney’s speech to be blacked out to marginally interested voters must have been viewed as a blow to the Romney campaign’s hopes for a comprehensive polling bounce across all demographics coming out of the convention.

And then came the news that a storm churning in the Caribbean threatens to transform into a major hurricane. Furthermore, that storm is targeting, of all places, Tampa. The storm threatens to hit the city, either glancing or directly, on Monday night – the precise night of Ann’s speech.

This has been greeted as a near-cosmic confluence of events by Democrats. Is it possible that the GOP convention could be disrupted or even – gasp – postponed?

Well, that possibility remains unlikely. Isaac could disrupt the convention in some way, which would be a shame for the GOP as it would greatly frustrate the party’s hopes for a well-managed rollout ahead of autumn’s full-court press. But the speculative coverage of the hurricane ahead of the convention could salvage the GOP’s hopes to drive up interest in that first convention day and, thus, Ann Romney’s 10:30 p.m. address.

The broadcast networks will not reverse course on their decision not to cover the convention on Monday, but the hype that surrounds a storm is likely to push a few marginal voters onto online feeds and the cable news networks to watch some of the the convention’s first night — even if that impulse is motivated by schadenfreude.

The hurricane may still be the God-send that Democrats hope it will be, but it also has the potential to salvage the Republican’s hopes to dominate the news cycle next week. It is just possible that this coming storm could be the savior of the convention’s first night. Without that storm, Ann Romney’s speech would probably be seen only by already committed voters. Isaac could become a blessing in disguise for the GOP.