Winning Isn’t Everything? Examining What Really Matters In Ratings
ratings

Winning Isn’t Everything? Examining What Really Matters In Ratings 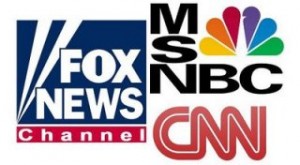 Buckle your seatbelt because we’re going full speed ahead into insidery territory.

TVByTheNumbers, which documents network and cable ratings, asks an interesting question – does “winning” actually matter? It depends who you ask – let’s look at the options.

TVByTheNumbers approaches the subject based on a Jay Leno vs. David Letterman late night ratings battle, on the heels of one of Leno’s worst quarters ever. But it can be extended to cable news – with Fox News consistently “winning” across the board for nearly two years, and CNN and MSNBC making the argument about increases or margins or improvements or, well, financial gains.

The TVByTheNumbers guys disagree. Bill Gorman thinks “that all that matters to the business of television are ratings, whether they’re going up or down, and the ad sales those ratings generate.” Robert Seidman writes “Bill thinks there’s no reasonable argument to be made that winning matters. We disagree.”

Spud at Inside Cable News falls on the ‘winning isn’t everything’ side. “You can have low ratings but if your brand caters to a high income demographic with lucrative advertisers, being first isn’t the imperative one might think, at least in the short to medium range term,” he writes.

From what we’ve gathered covering the ratings on a nightly basis, and more broadly month-to-month, is that everything matters. Now, that’s not just a cop out to not really answer the question – it’s just a fact. First of all, winning is important, because no matter how you slice it, winning means your ratings are strong, and stronger than the competition. But year-to-year improvement is important as well, so if a network like MSNBC goes up in a category while FNC goes down, it’s not irrelevant because FNC is still #1.

Often networks that aren’t winning, like CNN or even MSNBC, argue that their advertisers don’t look at the race, they look at the reach – meaning it doesn’t affect their sales if they aren’t the top cable news network. That’s a fair point, but it ignores the idea that winning is a great selling point as well. CNN and MSNBC, for nearly two years, can’t tell their advertisers that they’ll be seen by the largest cable news audience, according to Nielsen – a claim FNC can continue to make and sell on. It’s something CNN could say for moments during the 2008 presidential election, and they certainly did whenever they could.

So winning isn’t everything, but it is an important factor. Other than that – well, the debate continues.