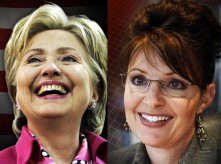 The newest book about 2008’s soon-to-be-legendary presidential campaign hits shelves today. WaPo reporter Anne Kornblut’s Notes from the Cracked Ceiling: Hillary Clinton, Sarah Palin, and What It Will Take for a Woman to Win hits bookshelves today and some early excerpts (courtesy of Mike Allen) not only looks like the makings for a good read but suggest that the battle of the political sexes — so prevalent during much of the campaign — may be about to return as a major talking point. And well it should.

This is from the chapter on Sarah Palin (though I assume she factors in to more than one) captures the McCain campaign right before it made a left turn into Bizarro world. Here senior McCain staffer Nicole Wallace (whose relationship with Palin turned out to be somewhat rocky) recounts the first time she was contacted by a “real” reporter regarding the maternity of Trig Palin.

“’I will never forget the first phone call I got from a real reporter, from a real newsroom, about the maternity of the infant,’ Nicolle Wallace said. ‘He started asking me about amniotic fluid, and whether or not it had leaked … I said, ‘Are you asking me to respond, on the record, to a charge that amniotic fluid came out of her [body]?’ He was so mortified, he hung up.’”

Clearly that mortification did not last very long for most of the “real” press. There’s also an interesting tidbit on more tears from Hillary Clinton, this time off camera and in reaction to a cabler describing Chelsea as being pimped out. It apparently fell to Chelsea to reassure her mother she was fine.