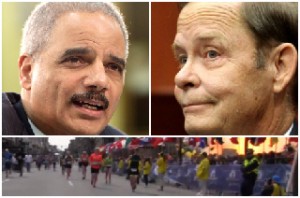 With the first week of his son George Zimmerman‘s trial coming to a close and Father’s Day just around the corner, the defendant’s father Robert Zimmerman Sr. must have thought now was the perfect time to release his new e-book, “Florida v. Zimmerman: Uncovering the Malicious Prosecution of my Son, George.”

The controversial text contains the bold claim that April’s Boston Marathon bombing never would have happened had the FBI not been spending so much time investigating the death of Trayvon Martin.

Zimmerman directs most of the blame to Attorney General Eric Holder, who he says “shamelessly” hyped his son’s alleged murder case “to obtain great advantage in the African-American community.” He goes on to claim that Holder’s decision to investigate whether Martin’s death constituted a federal civil rights violation led to the FBI to not have “adequate resources to investigate clearly identified potential terrorist” threat in Boston. “Tragically,” Zimmerman writes, “we have suffered the consequences of Mr. Holder’s politically motivated decisions.”

In addition to the accusations against Holder, the e-book contains a chapter called “Who Are The True Racists,” which includes a list of black leaders and organizations that Zimmerman has deemed “racist,” handily compiled by ThinkProgress below:

The NAACP. “[S]imply promotes racism and hatred for their own, primarily finical, interests” and “without prejudice and racial divide, the NAACP would simply cease to exist.”

NAACP President Benjamin Jealous. “[W]hat I would expect of a racist.”