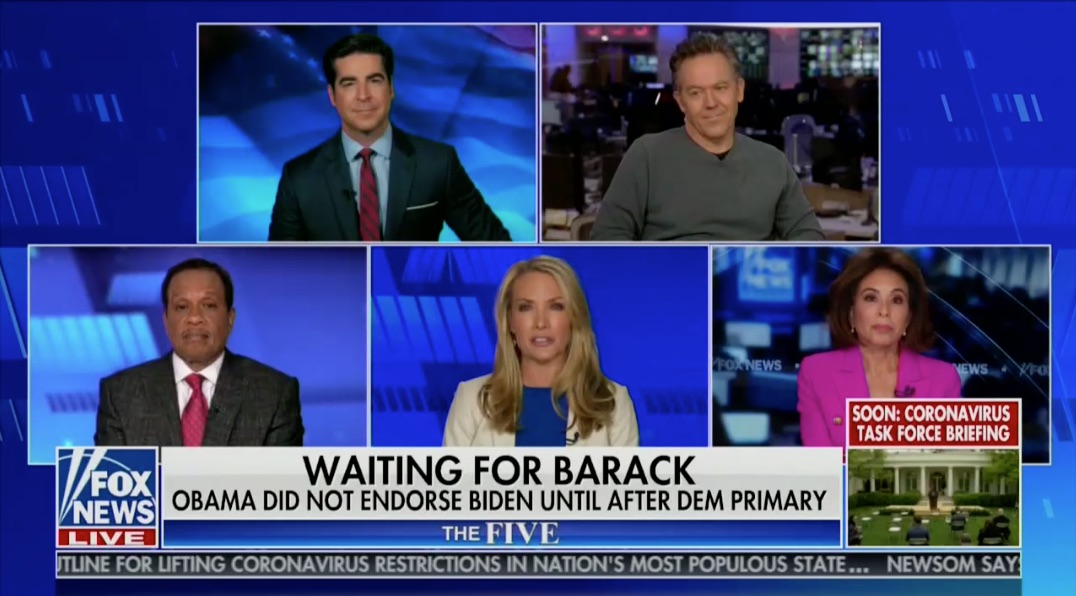 Fox News show The Five scored impressive ratings on Tuesday with Jeanine Pirro guest-hosting, outranking everything else on the network — including all three primetime shows — except the ongoing ratings monster ratings that is the daily White House coronavirus briefing in the 6 and 7 p.m. hours. And CNN enjoyed a daytime ratings victory in the advertiser coveted 25-54 demographic, eking out a win over Fox News.

The Five pulled down 4.6 million overall viewers on Tuesday, outstripping Tucker Carlson Tonight (4.43 million), Hannity (4.26 million), and The Ingraham Angle (3.56 million). Fox’s 6 p.m. hour, which was again wholly pre-empted for the coronavirus briefing led all shows and networks with 5.5 million viewers. As Trump’s White House briefing rolled over to the next hour, it carried huge numbers of Fox viewers with it, giving The Story with Martha MacCallum the ratings runner-up spot at 4.62 million overall viewers. At 11 p.m., Fox anchor Shannon Bream was back on top with 494,000 in the demo and 2 million overall.

MSNBC and CNN, both of which now frequently cut away from the White House briefing during Trump’s portions to add analysis and fact-check his comments, still do not draw anywhere near Fox News during this high-visibility media moment. MSNBC’s coronavirus ratings from 6 to 8 p.m. (1.93 million) were easily surpassed by several of that network’s afternoon and prime time shows. CNN’s Situation Room with Wolf Blitzer rode the briefings to 2.33 million overall and 648,000 in the demo, second best for the network on Tuesday.

There were some bright spots for MSNBC, as well. Morning Joe won the 6 a.m. hour. And Rachel Maddow continued her surge, running a strong second in overall ratings at 9 p.m., posting 3.2 million viewers, tops of all MSNBC shows for the day. At the same hour, coronavirus-positive Chris Cuomo notched the best demo rating for CNN that day — 706,000 — just 55,000 behind ratings winner Sean Hannity.