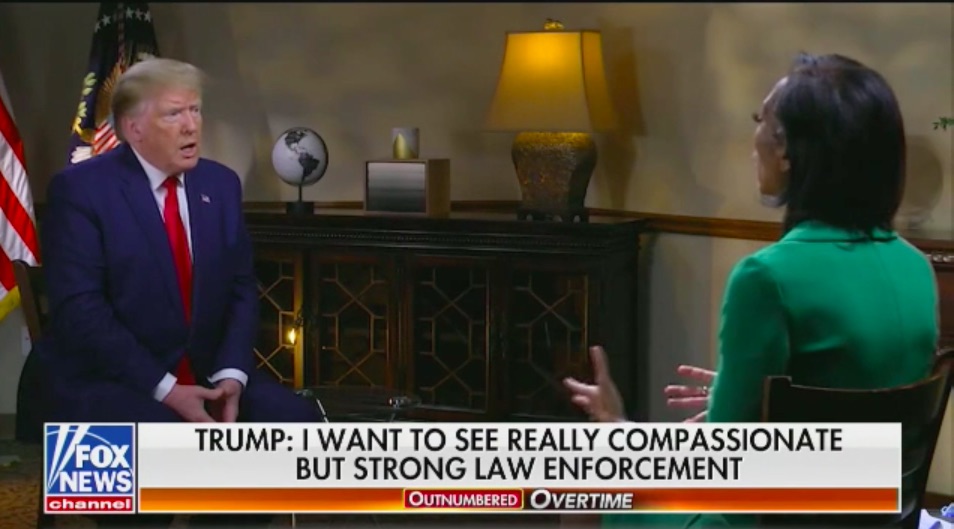 The one-on-one sit-down with the president, which Fox News began to offer shorts snippets of on Thursday, got a full airing during Faulkner’s hour-long program on Friday at 1:00 p.m. With several noteworthy moments, including the Fox host explaining to Trump the racist context of one of his tweets and Trump bizarrely taking jabs at the legacy of Abraham Lincoln, the interview helped the network win the time-slot with 318,000 viewers in the coveted 25 – 54 age demographic, according to Nielsen Media Research. It also won in total viewers with 1.96 million, easily outpacing CNN (274,000; 1.11 million) and MSNBC (159,000; 1.21 million). The Outnumbered performance snapped a streak where CNN had consistently ruled in the afternoon, thanks to a surge in interest for breaking news coverage of the nationwide protests following the killing of George Floyd by Minneapolis police.

That ratings surge, however, began to noticeably abate throughout last week even as nationwide peaceful protests continued but the initial unrest ebbed. As a result, CNN’s primetime ratings, which were leading in the week prior, fell back to a distant second place in the demo on Friday, with its 379,000 viewers far behind Fox’s 586,000. (MSNBC came in third with 315,000.) The same story occurred in overall ratings, as Fox dominated with 3.59 million, beating out MSNBC’s 2.16 million and a now-struggling CNN’s 1.41 million.

Fox’s Tucker Carlson Tonight led all of cable news in both overall and in the demo with 3.89 million and 632,000 viewers, respectively. CNN’s primetime lineup, though, slumped even further, with all three of its programs falling to third in total viewers behind is Fox News and MSNBC competition. And CNN’s Cuomo Prime Time was beaten soundly by The Rachel Maddow Show in both A25 – 54 viewers (383,000; 425,000, respectively) and overall (1.46 million; 2.92 million).