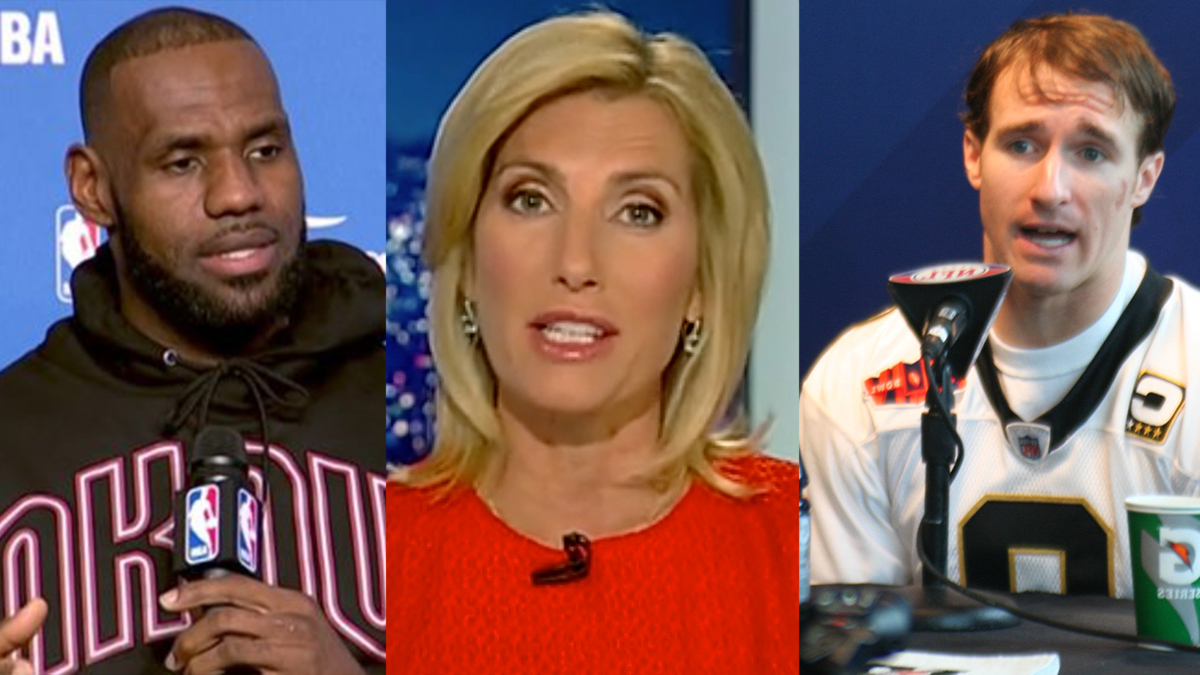 Athletes from all different sports called out Fox’s Laura Ingraham for defending Drew Brees‘ criticism of protesting during the national anthem while telling LeBron James‘ to “shut up” for his activism in 2018.

In 2018, Ingraham told James to “shut up and dribble” and to “keep the political commentary to yourself,” responding to his claim that President Donald Trump doesn’t “give a f*ck about the people.” The Fox News host received widespread criticism for her remarks which became the title of a three-part documentary, “Shut Up And Dribble,” by James’ production company.

On Wednesday, Brees criticized athletes who knelt during the national anthem, specifically Colin Kaepernick who some have said was “blackballed” from the NFL for his protest. “I will never agree with anybody disrespecting the flag of the United States of America or our country,” Brees told Yahoo Finance.

Unlike her commentary against James, Ingraham defended the New Orleans Saints quarterback, saying, “He is allowed to have his view about what kneeling and the flag means to him. He is a person. He has some worth, I would imagine. I mean, this is beyond football though. This is totalitarian conduct. This is Stalinist.”

Brees has since apologized for his “insensitive” remarks, but Ingraham’s defense of Brees in comparison to James has been ripped into shreds by the sports community.

If you still haven’t figured out why the protesting is going on. Why we’re acting as we are is because we are simply F-N tired of this treatment right here! Can we break it down for you any simpler than this right here???? ??‍♂️. And to my people don’t worry I won’t stop until I see https://t.co/e4pJ0PvwJj

Laura Ingraham, you are the problem. What @drewbrees said is ok but what @KDTrey5 and @KingJames said is not. It’s time that you look at yourself in the mirror. #EqualityMatters #EqualRights https://t.co/dImZze5WpN

Somebody needs to tell @IngrahamAngle to Shut Up and Listen tho https://t.co/HwUMsPEveG

–She’s giving us a window into how a bunch of others like her see us… https://t.co/EvpDnH2A5M

Wow… so Bron and KD need to shut up and dribble… but DREW BREES (white man) can have opinions… ??‍♂️

Be careful and mindful of what come out ya mouth Laura it’s deeper then that sound like you part of the problem too!!! Smh @IngrahamAngle do better https://t.co/Yiqm0urd87

How does she still have a job? https://t.co/q6doKDyGKX

UPDATE: Laura Ingraham addressed the controversy on her Fox News show Thursday night, stating “Every American, every-American has the God-given right to speak his mind on any issue. I think in order to heal and shed light on gross injustices, our country needs more dialogue, not less. And we need more respect, less retribution.”