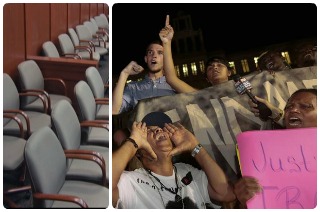 Even if you resent it, you have to appreciate when reality cuts against the pundit-promoted narrative of the moment. In the wake of the verdict which found George Zimmerman not culpable for the killing of Trayvon Martin, many commentators lashed out at the justice system itself. With a nearly all-white jury, some political commentators asked how anyone could have anticipated an outcome other than full acquittal. On CNN today, it was revealed that it was the prosecution that ensured the jury would be composed primarily of white women. Why? One of the only black potential jurors being considered was nixed by the prosecution because he watched Fox News.

“Do Trayvon Martin’s parents, you think, I mean, when they look at the jury makeup and they look at the decision that jury came to, do they say, ‘Why didn’t we have an African-American on the jury? Why did we have six white women?’” asked CNN anchor Carol Costello on Tuesday.

“Although, if I remember correctly one of the prosecutors struck a black, a potential black juror from the jury,” Costello recalled.

“Yeah, he was also — I was just — he was also a Fox News watcher,” replied a snickering Political Director for Russell Simmons’ website TheGlobalGrind.com, Michael Skolnick. “So that was, you know, problematic for the prosecution.”

And with that admission, the many political commentators lamenting the racial composition of the jury which they implied — or stated outright — was responsible for Zimmerman’s acquittal, were made to look more than a little foolish.

RELATED: Juror B37 Defends Zimmerman’s Motives To Anderson Cooper: His ‘Heart Was In The Right Place’

“I wasn’t sure if it was going to be manslaughter or an acquittal,” revealed MSNBC host Touré on Monday. “In retrospect, an almost all-white jury in the South, what was I thinking that there could have been anything but an acquittal?”

“George Zimmerman skirted justice with an all-white jury of his peers which consisted of all women,” Guardian Express writer Thomas Barr lamented. “There were no black jurors present on the panel for concluding the verdict. It is worth to note that one juror was of Hispanic descent.”

“Raising over $200,000.00 for his own defense lawyers it was apparent who the ruling society backed in this case,” he ill-advisedly continued. “Chalk it up to society getting an equalizer for the verdict in the OJ case. George Zimmerman skirts justice with an all-white female jury.”

“Straight Up: The racism that resides at America’s core has led to the continual dehumanization of blacks,” bellowed Harvard University professor Lawrence D. Bobo in The Root. “America is racist at its core. I used to doubt this simplistic claim. Today I cannot. The murder of Trayvon Martin demands total, simple, honesty.”

The odds that anyone in the jury room openly rejected the arguments of “reasonable racism” — i.e., that enough of these people are criminals that it is basically OK to treat them all as suspects till they prove otherwise — went from low to near absolute zero when a singularly nondiverse jury was empaneled, as was true in Simi Valley.

Bobo linked the jury in the Zimmerman case to the “all-white” jury empaneled which cleared the Los Angeles Police Department officers of wrongdoing in their trial for the beating of Rodney King. Their acquittal resulted in the 1992 Los Angeles riots.

Even the measured and insightful civil rights expert and defense attorney John Burris, whose commentary about the Zimmerman trial has never been characterized by excessive displays of ideology, got into the act on Tuesday when he said that a lack of black jurors contributed to the jury’s dismissal of Rachel Jeantel as a witness.

Burris said that a lack of black jurors contributed to the impression among jury members that Jeantel was not a credible witness. He told MSNBC’s Tamron Hall that the jury could not identify with her cultural background and, thus, rejected her testimony.

Burris did not mention the many times Jeantel contradicted the testimony in her deposition on the stand, or the occasion when she called an attorney “retarded.”

It would seem that, contrary to so much emotion-driven commentary from the political commentators understandably aggrieved after the verdict in the case against Zimmerman, it is not the skin color of this potential juror that mattered so much as his belief structure. So, what to make of the news that the prosecution struck the only potential African-American juror over his inconvenient ideology?

A “Fox News watcher,” as Skolnick put it, is unlikely to have satisfied those actively bemoaning the lack of color on the Zimmerman jury. But why is it reasonable to assume that a conservative African-American man – presuming, and it is a presumption, that this is an appropriate label — would decide the case in a manner inconsistent with the aims of the prosecution? Because the gentleman in question would not have reflexively dismissed the reasonable doubt raised by the defense attorneys? Because that juror might not have elevated his own racial consciousness over the pursuit of blind justice?

If so, what those frustrated over the so-called “all-white” Zimmerman jury are tacitly admitting is that seeing true justice done was never their chief concern.