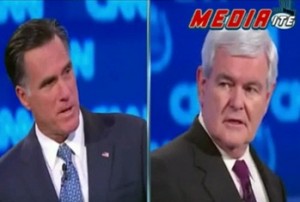 Now that former Speaker of the House Newt Gingrich is beginning to break away in Republican primary polls, the Mitt Romney campaign is beginning to ramp up its attacks. Saturday’s ABC News/WMUR-TV debate offers Romney his best chance to slow the Newt-mentum, but it’s not a do-or-die situation for the consistent poll runner-up. Newt Gingrich, on the other hand, needs to turn in a flawless performance to justify voters’ faith in his key selling point: the notion that he’ll mop the floor with President Obama in general election debates.

Saturday’s debate will be just the second this season to appear on a broadcast network, and the first to air in its entirety (CBS shunted the last half-hour of its debate to a webcast), giving all of the candidates a much wider audience to speak to. For Mitt Romney, there’s a certain amount of pressure on him to damage frontrunner Newt Gingrich, to slow his momentum in the polls, but it’s not desperation time. Romney has Gingrich badly outgunned in the fundraising and organization department, and can hang in with decent performances in early states.

Gingrich, though, has to fight sky-high expectations, fueled partially by his own hubris, that tie directly into his appeal as a candidate. Despite all of his baggage (personal, political, and financial), Republican voters are enamored of Gingrich because he expresses their existential panic at the prospect of a second Obama term, and they are drooling at the prospect of their big brainiac facing down the President in general election debates. A poor performance Saturday would seriously undermine that.

Superficially, this confidence in Gingrich’s debate prospects isn’t entirely misplaced. He has done well in the GOP debates thus far, and President Obama, as a candidate in 2008, never really managed to throw any punches in a debate. At the time, there was a near-constant refrain from then-Senator Obama’s supporters that he go on the attack in debates with then-Sen. Hillary Clinton, and later, Sen. John McCain. Aside from a few media-glommed moments, the fireworks never materialized, and the President’s debate performances were folded into the ongoing narrative about his too-cool temperament.

RELATED: President Obama: Be A Dick About It, Why Don’t You

Obviously, we won’t know the outcome of the Obama/Gingrich debates until they happen, but there are several things that cut against the notion that the President can’t survive a Newt-lear attack.

First of all, a closer look at Gingrich’s performance at this year’s debates shows a guy who has been hitting home runs off of a tee. Throughout most of the debates, Newt Gingrich has succeeded with a three point plan.

1. Enforce Reagan’s 11th commandment by changing the subject whenever the otheer candidates began to attack each other.

Up to this point, his opponents have largely played along, and pitched in by not attacking Newt. However, on the few occasions that Gingrich went on the attack with his rivals, he got punished badly. The GOP’s supposed supreme intellect got positively schooled by Rick Santorum(!) on the subject of foreign aid to Pakistan, with an assist from Rep. Michele Bachmann. Although his poll numbers survived it, Gingrich got slapped all over the place on immigration during his first debate as frontrunner. When Gingrich tried to attack Mitt Romney over the individual health insurance mandate, Romney served it right back to him, with hot mustard on it. This year, Gingrich has been great in batting practice, but he whiffs when he gets a big league pitch.

Romney, on the other hand, has been very strong in the debates when he’s needed to be. Most of the time, Romney has concentrated on seeming presidential, talking past his opponents much of the time. When he has traded body blows with his rivals, though, Romney has landed some crushing punches. Although he blew the dismount by complaining to the moderator, his exchange with Rick Perry on immigration was a big win, overall, an alpha-dog moment that completely inverted expectations.

Newt Gingrich is in for a tough debate, any way you slice it. As the frontrunner, he will have to face attacks from every direction, which he has shown little aptitude for defending against. If Romney rises to the occasion, he could reverse both men’s fortunes.

Whichever candidate makes it to the general election may find a completely different President Obama waiting for him on the debate stage. The President’s reelection effort has already made it clear that the calculus is different this time around, and the ostensible “high road” is not on the map. In 2008, it was more important for candidate Obama to seem presidential than to throw haymakers (his surrogates did plenty of that). This time around, expect to see more of the Barack Obama that crushed Republican talking points for over an hour at the House Republican Issues Conference in 2010. That’s the game film the eventual nominee needs to watch.