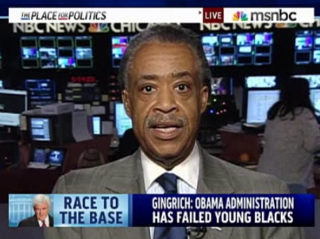 Newt Gingrich‘s latest outreach effort to the African-American community is not going over so well with some of the louder members of said group. On MSNBC yesterday, Rev. Al Sharpton argued that for Gingrich to even attempt to court the black vote as a Republican candidate was “an insult” intended to “cover up the fact that his campaign is falling apart,” and an actually an underhanded attempt to suppress the black vote.

Sharpton, who spoke to host Cenk Uygur yesterday, explained his outrage against Gingrich for telling Republicans to “have the courage” to sell their ideas to the most Democratic African-American voting block. Sharpton argued that black people received “disproportionate injury from Republican policy” that was so obvious it was offensive for him to promote those policies at all. In doing so, he argued, Gingrich “assumes that we’re stupid,” or “is trying to throw something out at the media to cover up the fact that his campaign is falling apart.”

Sharpton went further to propose that it was possible that Gingrich was also “hoping to suppress the black vote” by speaking ill of President Obama such that those that voted for him in 2008 and would never vote Republican would simply stay home. That theory aside, Sharpton was still outraged. “The audacity of even saying something like that,” he argued of Gingrich’s attempt to court the black vote, “is something that insults us.” It was not exclusively the idea of a Republican courting the black vote that outraged him, however, but what he perceived as Gingrich’s hypocrisy in using language such as “the food stamp president” and citing President Obama’s “anti-colonial, Kenyan” views in order to, according to Sharpton, court the racist vote as well.