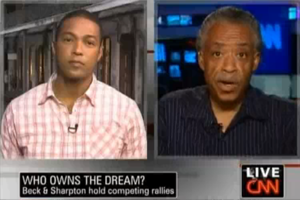 Given that they were holding competing events within the confines of the same city and commemorating the same occasion, it seemed fairly probably that Al Sharpton would have very little nice to say about Glenn Beck and his plan to restore honor to America. Speaking to CNN’s Don Lemon after the conclusion of his “Reclaim the Dream” rally, however, Sharpton seemed to take a “less is more” approach in criticizing Beck– though not on his definition of “civil rights.”

Sharpton repeated several times that, while he had not had the chance to watch Beck’s speech or much footage of the event, “it may very well be good.” Shown clips of Beck discussing the power of the individual and the impressive achievements of great Americans, Sharpton did not seem to disagree with any of Beck’s points– and, in fact, they may have to do with the fact that Beck seemed to have taken very deliberate steps to keep his words as nonpartisan as possible. It’s hard to disagree with the general notion that individuals have the power to effect change, which was the crux of his argument.

What he objected to, however, was the claim that “Restoring Honor” had anything to do with civil rights. “What civil rights agenda did [Beck] lay out? What I heard was a motivational speech.” He also noted that, by virtue of it not being Dr. King’s birthday, but his “policy speech day,” something of his actual policy– “very clear social policy calling on a strong federal government,” seemed to have been lost on the Beck crowd.

He also responded to the argument by some Beck supporters that his rally was less diverse demographically than “Restoring Honor.” He refrained from describing the demographics there, however, and only spoke to his own event, where, he noted, various speakers of black, white, Latin America, and LGBT backgrounds participated.

His chat with Don Lemon via CNN below: