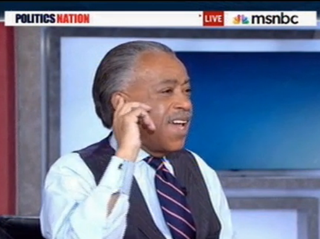 Al Sharpton doesn’t stay up too late on Saturdays, since he has to go to church the next day. This Saturday, however, he did not miss Saturday Night Live‘s version of his own show– and found it hilarious. On his show tonight, he parodied the parody of himself, played clips of the sketch, and even offered advice for the actor portraying him, Kenan Thompson: “leave the blueberry pie alone.”

Sharpton teased his own SNL segment with several seconds of his own imitation of Thompson’s imitation of himself, pretending to be confused about what camera to speak into and chiding his producer with “you guys don’t go to church! Where’s the health care package?” He then came back from commercial and asked how the audience’s weekend had been, playing an abridged version of the sketch– his insistence on calling Politico‘s Jim VandeHei “Jim VandeHeeho” and, later, asking if “Republicans are Nazis trying to blueberry steal pie out the box.”

Sharpton ceded that SNL “got me pretty good” and was happy to have fun with the show, noting that some Facebook fans thought the parody was harsh but “I thought it was hilarious. “I’m not a big fan of teleprompters and there’s a lot of red lights out there,” he ceded, but added a word of advice to Thompson: “if you’re going to do me, you’ve got to lose a little weight. Leave the blueberry pie alone.” Then Sharpton made one final, confusing cut to Hardball.

Sharpton’s teaser and SNL end segment via MSNBC below: