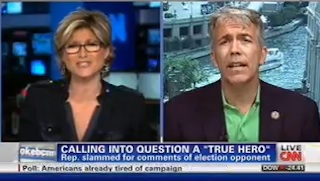 Illinois Tea Partier Rep. Joe Walsh has taken quite a bit of heat over comments he made at a recent town hall meeting where he accused his opponent in the coming election, Iraqi war vet Tammy Duckworth, of not being a “true hero” because she talked too much about her military service (combat service, it should be mentioned, which ended after 20 years when an enemy RPG attack took both of her legs). Walsh appeared on CNN today and, as he has since the story first got attention, refused to apologize, merely stating that his comments have been misconstrued and turned into a “manufactured outrage.” This, however, didn’t sit well with CNN’s Ashleigh Banfield, leading to the two engaging in an incredibly heated, 10 minute long shout-fest.

Things started off normally enough with Banfield asking if the comments had merely been a “slip up” and Walsh denying that. Then, however, when he accused Duckworth’s people off taping his every move trying to gin up controversy, Banfield cut in to argue that it didn’t matter who made the tape. This got Walsh’s ire up and, with that, we were off to the races. And this one was a marathon. I certainly hope both Banfield and Walsh had throat lozenges handy after all that yelling.

“Whoo, I need to take a big breath,” was all Banfield could say when she finally did get to cut to commercial.

That came after she and Walsh had tried to save the respectability of the debate with the CNN host offering that the Congressman was a “good adversary.” However, those niceties might have made for good face saving, it was the 10 minutes of quote shouting, paper waving, and word parsing that made for great television.