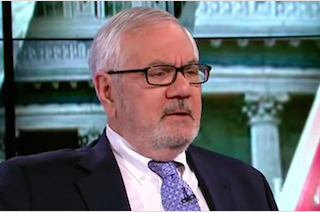 and when he stopped by CNN’s State of the Union on Sunday host Gloria Borger couldn’t help but ask for his view on Dr. Ben Carson’s declaration that being gay is a “choice.”

Unfettered by any lingering political constraints, Frank went after the potential 2016 Republican presidential candidate hard for suggesting that people go into prison straight and come out gay. “First, I’ve never heard prison rape described as a kind of example of choice,” Frank said. He said it is “striking how human intelligence can vary.” On the one hand, Carson is a “first-rate” pediatric neurosurgeon. But when it comes to something like sexual orientation, he is “abysmally ignorant.”

“Secondly, he wants to use that ignorance in the defense of prejudice,” Frank continued, noting that this ignorance “doesn’t seem to hurt him” with the Republican Party electorate.

Frank conceded that those who are “deprived of any other sexual activity” in prison may engage in homosexual sex but then challenged Carson to “come up with anybody outside of that coercive situation of a prison who chose his or her sexual orientation.” If Carson is going to say that people who “choose” to be gay can be discriminated against, then Frank argued the same should go for people who “choose” to be religious.

“I realized I was gay when I was 13,” Frank said. “Apparently his view is that as a teenager I said, ‘You know what I think would be a good idea? I think I’ll be a member of the most despised minority I can think of.'”

Confronted with the backlash to his original comments, Carson essentially blamed the media for focusing too much on what he said. “I simply have decided I’m not really going to talk about that issue anymore because every time I’m gaining momentum the liberal press says, ‘Let’s talk about gay rights.’ And I’m just not going to fall for that anymore,” he said. Only later did he “apologize unreservedly to all that were offended.”