Bill Maher Tears Into Liberals For Not Standing Up On Guns: Too Afraid To Say ‘Second Amendment Is Bullsh*t’

Maher Tears Into Liberals For Not Standing Up On Guns: Too Afraid To Say '2nd Amendment Is Bullsh*t' 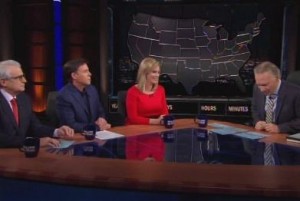 Bill Maher opened up the panel discussion on his show tonight talking about recent developments on gun control in the Senate. He lamented how liberals have basically conceded the gun argument to the center-right, saying that liberals to a certain degree also indulge in the “fetishization” of guns, and declaring that someone on the left needs to stand up and say that the “Second Amendment is bullshit.”

Maher noticed how much the Senate compromise bill focusing on background checks goes out of its way to make sure gun owners are protected, while accepting that things like an assault weapons ban are basically dead on arrival. Former Obama campaign manager Stephanie Cutter was more optimistic about the bill, while Bob Costas said the gun debate need to also be about mental health, better enforcement, and mandatory minimums for gun criminals.

Maher argued that the gun debate is a “constant center-right debate,” and that liberals are too afraid to stand up and say that the “Second Amendment is bullshit.” Former Reagan budget director David Stockman found it amusing that anyone would think having an “18th century citizen militia” armed with muskets somehow has “anything to do with liberty.” He said that the “real shield for liberty” is the first amendment, not the second.

Costas added that there are so many “paranoid types” who think that they’re going to need to rise up against the government, wondering exactly who is going to lead that movement. He said that the NRA is just a political lobby trying to protect the rights and profits of gun manufacturers, and so they’re not going to just simply evolve on gun control overnight.

Maher concluded the segment by saying that there is a big problem on the left with guns as well, pointing to how guns are still fetishized by liberals, citing how even after she got shot in the head, Gabby Giffords said she still supports the Second Amendment.