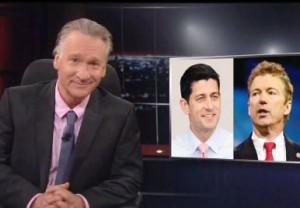 Bill Maher ended his show tonight by railing against a political movement he has aligned himself with in the past: libertarianism. He slammed the current wave of libertarians, among them Paul Ryan and Rand Paul, for having a “creepy obsession” with free markets, Ayn Rand, and government staying out of the way. He made it clear that he has not abandoned the libertarianism altogether, saying, “I didn’t go nuts, this movement did.”

Maher complained that the current crop of libertarians are “ruining libertarianism,” saying there’s a difference between holding that political philosophy and being a “selfish prick.” Maher admitted that he has expressed support in the past for a lot of what libertarians have to say, but along the way he noticed it evolved into a “creepy obsession with free market capitalism.”

Maher specifically brought up libertarian worship of Ayn Rand, whom he argued only sounds good when you’re a teenager but actually lacks any real substance. He declared that libertarians like Ryan and Paul who subscribe to this line of thinking are “intellectually stuck in their teenage years.”

Maher admitted that he still agrees with a lot of what libertarians have to say, but considers the movement to have basically gone “nuts,” always complaining about the nanny state and free market as if the government has no role in setting basic societal restrictions, even in the case of helping out with natural disasters.

He concluded that libertarians may hate Medicare and Social Security, but “it beats stepping over lepers and watching human skeletons shit in the river and I also like not seeing those things. I’m selfish that way!”