Bill Maher: The Existence Of A Black President Is Driving People Crazy 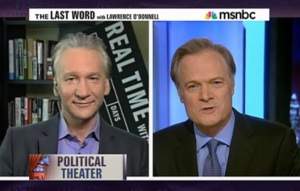 Last Word with Lawrence O’Donnell has quickly become a must-watch evening program, due to its combination of sophisticated talking points, goofy guests and unpredictable turns. And while we enjoy the confidence with which the show surprises its audience, it’s not infallible. At times, the show goes for hackneyed and predictable rhetoric—as was the case last night when Bill Maher joined the program, spewing the same bile in the guise of “comedy” that he’s been selling for years.

O’Donnell said Maher would provide insight into the crazy political season. After that introduction, Maher dismissed nearly everyone that disagrees with him as either stupid, crazy or racist—with an emphasis on the latter:

Bill Maher: I think it’s absolutely that that’s driving these people crazy. When they say they want their country back, that’s what they mean, really, is they want their country back to the appropriate time when a white person was in the White House. It’s called the White House, Lawrence. It’s not hard to figure out. But I think it’s also just impatience. I don’t want to cast most Americans as being racist, but I think a lot of them are just dumb. I’m sorry, but they are. They are clueless about the issues. They don’t think further than things are not great, let’s have a change. even though we just had a change two years ago.

I mean, they voted for this massive change two years ago. But because it didn’t immediately start raining 20 dollar bills, they want to go back to the way it was. They remind me of a battered girlfriend, you know, who goes back to the guy who was battering them because, I don’t know, the new boyfriend forgot their birthday or something? I mean, you can’t blame them for turning on the Democrats because the Democrats are so bad at selling what they are selling.

I don’t know if you saw that debate with Harry Reid. But it was exactly everything that is wrong with the Democratic party. And not knowing how to sell a message. He said five times — I counted it — he told the audience five times about Sharron Angle, he said, ‘She just doesn’t get the way things work in Washington.’ Well, you know what, Harry, that’s the one thing the voters like about her. They understand that she’s a nut. They understand that she is the old lady at the end of the block with 20 dead cats in the basement. They don’t want to vote for her, but you just keep reminding them of the one thing they do like about her, that she isn’t of Washington.

There’s no doubt that racism still exists in this country, and that there are some who have a very difficult time with the fact that our president is African-American. But to generalize about all frustrated voters—saying “they want their country back” as both Maher and O’Donnell do—diminishes other, more serious reasons some Americans are opposed to the Obama administration. And ironically, Maher and O’Donnell are guilty of oversimplifying and making generalizations about a frustrated voter base for reasons that aren’t entirely correct.

While the two do make some astute points in the following clip—which is still quite entertaining to watch—its inherent smugness may make the viewer wish to bathe shortly after watching it.