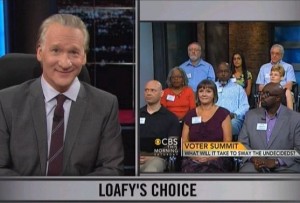 Bill Maher closed out his show tonight with an appeal for the media to stop playing up the impact of undecided voters on the election, asking how anyone in their right mind could be following the election and not have a preference between President Obama and Mitt Romney. Maher bashed the undecideds as “dipshits” and “nincompoops,” advising them to “stay home, because you probably couldn’t find your polling place anyway.”

RELATED: Who’s The Most Trusted Political Reporter? Close Race Between ‘Don’t Know’ And ‘Nobody’

Maher said that undecideds aren’t really carefully considering the differences between the two candidates, they just “don’t really give a shit.” He asked what possible new information voters would need before they could fully commit to one of the two main candidates. Much of Maher’s ire was directed towards the media for playing up the importance of undecided voters, telling them to stop treating undecideds like they’re more “noble and discerning” than the rest of the country.

Maher cited two undecided celebrities as evidence of the overemphasized importance of undecided voters: the Octomom and Kim Kardashian. Kardashian said she considers herself a liberal Republican, and Donald Trump even tweeted her to try and convince her to vote for Romney. Maher remarked that “trickle-down economics” might not be a good sell for Kardashian, since she has a very different idea of what “trickle-down” means.

Finally, Maher appealed to the media to stop caring so much about the undecideds. When you need to talk to someone about an important issue, Maher argued, you don’t speak to “someone who doesn’t know anything about it.” He also advised against having the dials on the screen during the debates to gauge what the undecideds think, and forget the focus groups with “nincompoops.” Because, Maher said, if he wanted to watch “ignorant jackasses bullshitting about the election,” he would just turn on Fox & Friends