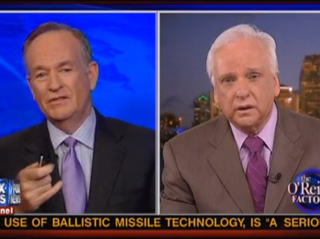 Over the weekend, Bill O’Reilly found his name being thrown around on CNN, where a panelist on Reliable Sources argued he was “in the tank” for Mitt Romney. O’Reilly objected but brought in a second opinion on his alleged bias: Bernie Goldberg, who seconded that: “the only tank I figure you are in is the Bill O’Reilly tank.”

Goldberg began his analysis of the segment on Reliable Sources with a positive comment for host Howard Kurtz, who Goldberg thought “made a good point about activists” in media. On O’Reilly, however, Goldberg argued, “the only tank I can figure out you’re in is the Bill O’Reilly tank… you’d never throw Bill O’Reilly under the bus.”

O’Reilly noted that he was still irked by being called a partisan, but understood that, on CNN, when “you hire guys like Paul Begala or James Carville, you’re hiring a party,” but that they were members of a party paid to campaign for individuals, where as “all of the sudden, this woman comes on and says Glenn Beck and Bill O’Reilly… Beck is not in any party!”

Goldberg agreed that it felt random, but it was a downside to success. “I think you, you Bill O’Reilly, have become the poster boy of every liberal complaint about everything on cable TV… because you’re the most well-known person and because you work for Fox.” He then took a surprise stab at a personality neither on Fox News or CNN: “No one out there is saying ‘Cable news would be so much better if we could get rid of Dylan Ratigan.'”