Bill O’Reilly Defends Obama From Romney In Interview: ‘He Got Osama Bin Laden’ 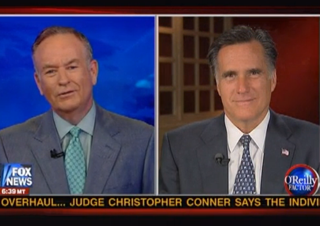 After a debate night marked by the multilateral attack facing frontrunner Rick Perry, his closest competitor, Mitt Romney, gave his assessment on the performance and some topics that eluded the candidates on stage to Bill O’Reilly tonight. After a few questions on his relationship with Perry and the dynamics on stage, however, O’Reilly went on the offensive, pushing Romney to explain how, after the killing of Osama Bin Laden, President Obama could be considered a foreign policy failure.

O’Reilly opened the discussion, of course, with questions about the debate in which Romney participated last night, asking whether Romney had predicted that all the candidates would “gang up on” Perry. The former Massachusetts governor countered that he didn’t have any specific expectations, but “I typically know that there are some topics where they all come after me,” and the same holds for each candidate. He also answered some questions in the negative about alleged “bad blood” between him and Perry from several years before, from when he was organizing the Olympics.

“That is not true at all,” he replied of that specific claim, and generally, noted the two were “big guys” and “when this is over, we’ll all come together and support who the nominee is… are there ever any points of friction between us? Of course.”

O’Reilly then turned to the general election, asking Romney whether he thought “Barack Obama has been the worst president in history.” “I’m not a historian,” he answered by way of disclaimer, but tore into the President, particularly for his foreign policy. O’Reilly took the answer as an opportunity to put Romney on the defensive. “I don’t understand what failure you’re talking about– he got Osama bin Laden. He’s dead,” O’Reilly retorted, adding that, in terms of foreign policy, the President has “kept most of the Bush stuff in place” and been generally moderate. Romney responded that the presence of a nuclear Iran was still a serious problem, and responded to questions of what he would’ve done differently by suggesting a “credible option” to intervene to stop a “nuclear folly.” O’Reilly appeared somewhat unconvinced.