Rep. Charles Rangel To Bill O’Reilly On Ethics Violations: “Hell No I Didn’t Say That” 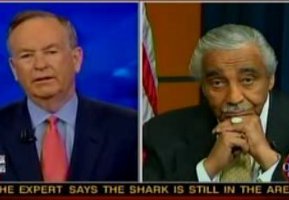 Less than a month after being convicted on 11 counts of ethical violations by a House panel, Rep. Charles Rangel (D-NY) sat down for a chat with Bill O’Reilly on the Factor tonight. If you thought O’Reilly would push Rangel more than Rangel believed was fair, and ultimately neither would really get anywhere…well, yeah, that’s about how it went.

O’Reilly asked Rangel about his relationship with President Barack Obama, and asked whether Rangel was hurt by Obama saying in July that the accusations against Rangel were “very troubling.” Rangel responded that it’s tough for him to get personally hurt over what a politician says about him. Fair enough, but when talk turned to the ethics violations themselves, Rangel didn’t think O’Reilly was giving him a fair shot to answer questions, and O’Reilly didn’t seem to think Rangel was doing enough to answer those questions. This did lead to some entertaining exchanges:

O’Reilly: So you think that the majority of your constituents felt you didn’t do anything wrong, so they voted for you.

Rangel: Hell no, I didn’t say that, Bill, and I’m surprised, really, that you’re taking this approach.

…but it didn’t make the overall conversation any more enlightening. O’Reilly and Rangel wee on two different wavelengths, with Rangel imploring O’Reilly to understand that “there was no evidence of intent to deceive anybody,” while O’Reilly told Rangel, “I think you’re diminishing the seriousness of this situation.” And when O’Reilly shifted topics to Obama’s tax compromise and asked Rangel if he felt Obama would get the deal he’s looking for, Rangel wouldn’t make a prediction.

O’Reilly told Rangel he’d have him back on the program again – let’s hope that if and when he does, the next one of these interviews will have more concrete answers and less trying to talk over one another. Video of the clip, via Fox News, below.