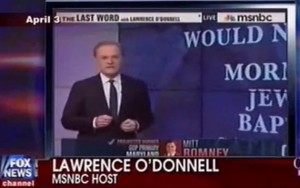 On Tuesday night, MSNBC’s Lawrence O’Donnell continued his “politics of religion” series by defending President Obama from a Mitt Romney attack that he’s trying to establish “secularism” as a religion in the U.S. He did this with a blistering critique of Mormonism as an “invented religion.”

Fox News’ Bill O’Reilly responded by calling O’Donnell’s screed a “smear,” and made the point that if O’Donnell had similarly blasted Islam, he would have been fired.

If you only watch the part of O’Donnell’s “Rewrite” segment where he boils the origins of Mormonism down to “a guy in upstate New York” who “got caught having sex with the maid and explained to his wife that God told him to do it,” you might get the idea that he was attacking Mitt Romney’s religion. And, you would be right, but if you watch until the end, you’ll see that his broader critique is of “our extremely religiously intolerant electorate.”

O’Donnell explains that Romney’s attack on President Obama is the result of his own vulnerability on religion, based on a Gallup poll that shows 22% of Americans say they would not vote for a Mormon, versus 9% who wouldn’t vote for a Jew, and 7% each for Catholics and Baptists. This is actually a slight improvement from the last presidential election, when 24% said they wouldn’t vote for a Mormon. Catholics and Jews have actually lost ground since then.

I’ve never heard O’Donnell’s particular version of the origins of Mormonism, but unlike some of my “Professional Left” colleagues, I don’t find the Mormon origin tale any crazier than talking snakes, rib-fashioned women, or even radioactive spider-bites. Hell, I hold the fervent belief that my manner of dress decides NFL football games. What bothers me is that voters care which particular such beliefs a candidate holds. But it gets worse.

While O’Donnell’s tone is unquestionably mocking toward Mormonism, his overall point is that the extent to which voters place importance on a candidate’s religious beliefs is only exceeded by their requirement that they have some. In that same pol, 49% of voters said they would not vote for an atheist. Here’s O’Donnell’s bit, from Tuesday night’s The Last Word:

Now, I would probably be less likely to vote for an atheist simply because most of them are smug douchebags, but if none of these guys told me what they believed, I would never think to ask. I get it. Being an intelligent species has many benefits, but awareness of our own mortality ain’t one of them. Whatever gets you through the day, vaya con Dios. Or not. Just leave me alone about it.

Fox News’ Bill O’Reilly took a small section of O’Donnell’s segment and went off on it, and surprisingly, made a couple of good points. He played the “invented religion” clip, then made an excellent point, perhaps unintentionally. “What a smear,” O’Reilly said. “Are you kidding me? That’s like saying no Episcopal or Anglican could run for president because of Henry VIII.”

Fox contributor Dick Morris later added that “That would discount pretty much every believer from running for any office.”

I agree. It stands to reason that holding a raft of irrational beliefs would be more of a disqualifier, to more voters. While O’Donnell is correct to point out the intolerance evident in the first part of that poll, it is even more remarkable that people require candidates to hold some strong supernatural beliefs, even if they’re not the same as the voter’s. Maybe our electorate is like a giant religious Comic-Con; it doesn’t matter if you like Marvel or DC, as long as you show up wearing some kind of costume.

The other excellent point that O’Reilly made was that “if (O’Donnell) used the same words going after Islam, they would have fired him.”

He’s probably right, but if O’Donnell had dressed down Islam in a similar fashion, he could still always find work at Fox News, couldn’t he?

Here’s the clip, from The O’Reilly Factor: